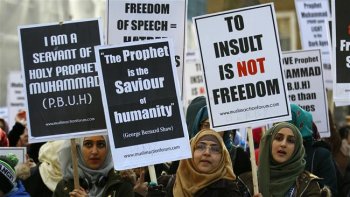 A poll of Muslim opinion in the UK has exposed a large minority who believe violence against those who depict Mohammed is justified.

Muslim men were only slightly more likely to agree with the statement than women, by 1%, with 10% of Muslim women agreeing.

The poll also revealed that over a quarter of British Muslims have some sympathy for the motives behind the Charlie Hebdo massacre – a finding the former faith and communities minister Baroness Warsi described as "worrying".

National Secular Society campaigns manager Stephen Evans said: "These findings should concern anyone who values fundamental rights and freedoms. Like most other citizens, the vast majority of British Muslims are rightly appalled by violent reprisals for depicting Mohammed. But if 11% of Muslims think violence should be used to stifle free expression – and that Paris-style attacks are an appropriate response to cartoons, as this poll indicates, then we have a very serious problem.

"The findings also demonstrate the importance of amplifying the progressive Muslim voices that are countering poisonous narratives within the Muslim community, but which are not being sufficiently heard."

25% of Muslims aged 18-34 disagreed with the statement, "acts of violence against those who publish images of the Prophet Mohammad can never be justified". 82% of 18-34 year olds said that it is "deeply offensive" to them when images of the Prophet Mohammed were published, compared with 71% of Muslims aged over 45, perhaps offering some evidence that younger Muslims are more religious than their parents and grandparents.

30% of 18-34 year olds said they had "some sympathy for the motives" behind the attacks on Charlie Hebdo, whilst 24% of those over the age of 45 said the same. Almost one-third of UK Muslims agreed with the statement, "I understand the motives of those who launch attacks in the name of Islam because the religion has been insulted". 32% were not surprised that "the attacks in Paris happened".

14% said that if they could, they would leave Britain "to go and live in a Muslim country".

Opinion was divided nearly in half when respondents were asked if "Muslim clerics who preach that violence against the West can be justified" were out of touch with "mainstream Muslim opinion". 49% said that they were, whilst 45% indicated that they were not.

The pollsters also questions respondents on other issues, and found that 17% of UK Muslims agreed that "it is appropriate that Muslims who convert to other religions are cut off by their family".

Two-thirds of respondents disagreed when asked if they would like their children "to go to a Muslim state school" if given the choice.

The full ComRes poll for the BBC can be found here.