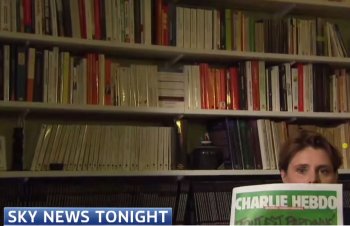 Caroline Fourest, former writer for Charlie Hebdo and honorary associate of the National Secular Society, was cut off during a live interview with Sky News after she held up a copy of the Charlie Hebdo magazine cover whilst on air.

At that point in the interview, Fourest picked up a copy of the front cover in question and said it was "completely crazy that in the UK you cannot show a simple drawing… with Mohammed."

At that point, the camera began panning up away from the magazine cover before it cut away back to the Sky News studio. The host said that "at Sky News we have chosen not to show that, so we would appreciate Caroline not showing that."

The presenter then turned to the camera and said "I do apologise for any of our viewers who may have been offended by that as you know here at Sky News we have taken an editorial decision not to feature the cover of Charlie Hebdo."

The French satirical magazine published a record five million copies this week, in its first issue since the attack which claimed the lives of ten of its editorial staff.

NSS President Terry Sanderson said: ""Even the BBC is prepared to show the cover of Charlie Hebdo, it seems extraordinary that Sky News has permitted the fanatics and extremists to dictate its editorial policy. I am very disappointed that such a prestigious news channel has chosen to cave in to the threats of terrorists. Caroline Fourest is right to call out the British media for its cowardice and hypocrisy."

Since the attack, some UK publications have finally decided to publish images of the Charlie Hebdo cover featuring the Prophet Mohammed. The Guardian reprinted the cover in an article on Tuesday 13 January, with a disclaimer which read: "Warning: this article contains the image of the magazine cover, which some may find offensive."

The BBC came under fire after its editorial guidance was discussed on Question Time. The guidance read "due care and consideration must be made regarding the use of religious symbols in images which may cause offence. The Prophet Mohammed must not be represented in any shape or form."

The NSS called for the restrictions to be abolished, and the guidance has now been withdrawn. Since then the BBC has shown depictions of Mohammed on News at Ten.

The interview with Caroline Fourest on Sky News can be seen here.