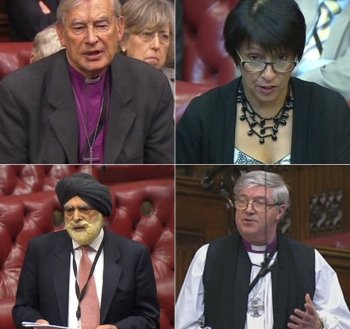 The role of religion in schools has come under scrutiny during a House of Lords debate on the role of religion and belief in public life. The debate was called by the Rt Revd Lord Harries of Pentregarth, formerly the Bishop of Oxford.

The debate was wide-ranging, with discussion ranging from faith schools to social action, to the presence of Bishops in the House of Lords, though many speakers addressed education prominently in their speeches. Lord Harries, introducing the debate, acknowledged that there had been "major issues concerning religion in schools."

Baroness Falkner, an honorary associate of the National Secular Society, said that whilst parents' religious and philosophical convictions should be respected in the educational provision that the state offers, the demand for a religious education, wholly on parents' terms, was an "unreasonable and potentially divisive demand which must be resisted".

The Baroness said that "rather than facilitating the segregation of pupils along religious lines, we should be doing everything we can to ensure that children of all faiths and none are educated together in a respectful and inclusive environment."

The Baroness also drew attention to the "wider problem of faith-based schools narrowing the curriculum to suit their own particular religious ethos." She cited the example of the Yesodey Hatorah secondary girls' school, which recently admitted redacting exam questions on human reproduction, because they conflicted with the 'ethos' of the school.

Baroness Falkner also criticised the requirement for a daily act of 'broadly Christian' collective worship in schools, saying that the law is "unevenly applied, can reduce a broad and balanced approach, and seriously undermines parents' abilities to raise their children in accordance with their own beliefs."

Baroness Massey drew attention to a "mistaken confusion of education and indoctrination" and argued for education to "develop personal and social skills, good citizens and thinking skills based on dialogue and discussion rather than on one-dimensional doctrine."

Lord Warner noted testimony heard by the All-Party Parliamentary Humanist Group from the "original Trojan Horse whistle-blower" as well as a former student of an Accelerated Christian Education (ACE) school. Warner told the House how parliamentarians on the committee had been "truly shocked to learn what was going on in some of our schools in 21st-century Britain in the name of religious beliefs, and by the apparent inability of our legal and regulatory systems to safeguard our children from what can only be described as indoctrination and abuse."

Warner added that the curriculum in the ACE school system "is a fundamentalist Christian one that originated in the United States. It is widely considered to be creationist, homophobic and misogynistic. The teaching materials used in these schools that were presented to us certainly supported this view. Much of the material is in a comic strip format with characters that could only be described as risible if they were not being used to brainwash and indoctrinate young minds. It was very scary that the so-called science teaching was leading to certification that was being used to progress children to further education."

Lord Dubs criticised presence of Church of England bishops sitting in the legislature as of right. The Labour peer said that if he had to set a pub quiz question it would be "apart from the House of Lords, in which legislature in the world is a block of seats reserved for members of a religion?"

When he asked if there were "any takers", other peers responded correctly with cries of "Iran".

Turning to education, Lord Dubs warned "the more religious-based schools we have, the more divisive will be the consequences." He said faith schools were "having a damaging effect on our society and on the religions themselves."

Commenting on the role of religion in social action, Labour peer Baroness Sherlock, herself a practising Anglican, noted the "contribution that believers and faith-based organisations make to our national life". She stressed the need to "learn from the strength of faith-based work but recognise that there are risks, both to the state and to the groups, of drawing faith-based groups into delivery."

Promoting the role of religion in public life, Lord Singh of Wimbledon said "religious instruction" was required for society, stating that religious teaching was like an "ethical satnav". Lord Blair went further, and said that whilst atrocities had been committed in the name of religion, "worse has been done in the name of secularists creeds."

Conservative peer Lord Ahmad, responding on behalf of the Government, said he believed that faith was a "force for good". The Communities minister reinforced Secretary of State, Eric Pickles' warning about secularism "becoming so aggressive that it attacks religion in all respects and encourages intolerance towards others ". He said the best response was to "champion values that define our country", many of which he said were "founded in faith".

Lord Ahmad recognised the value of a broad-based education, and addressing Baroness Falkner's concerns directly, said it was "essential that all schools prepare children for modern life". He said the Government was "working with local school leaders and governors to ensure that children are not put at risk by the rise of extremism".

In closing, Lord Harries said there was a "need in our society to build common ground between religious believers and those who have no religion but regard themselves as humanists" and cited the moral philosopher Michael Sandel, criticising society for focusing on individual freedom alone, to the neglect of other values.

Commenting on the debate, Stephen Evans of the National Secular Society, said: "Britain's religion and belief landscape has changed dramatically over the past few decades and there is clearly a need to rethink the role of religion in public life.

"The increasingly diverse nature of society means the traditional manner of categorizing people by their faith identity is anachronistic and redundant, not to mention dangerous. If we are to avoid sectarianism becoming a major problem, the state needs to treat people as individual citizens rather than as members of a particular faith or belief group.

"It's time the public domain became wholly secular, leaving religion as a matter of private conviction – and not the basis on which we organise schools and other public services which we all share."