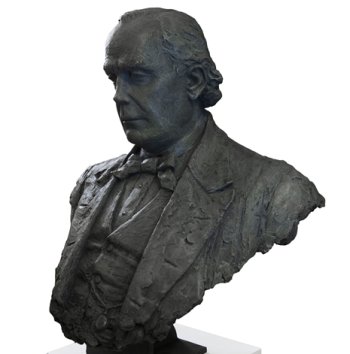 A newly commissioned portrait bust of Charles Bradlaugh has been unveiled in Portcullis House, at a reception attended by parliamentarians and members of the National Secular Society (NSS).

Terry Sanderson, president of the NSS, said: "We're thrilled to have been instrumental in enabling this magnificent portrait bust of our founder Charles Bradlaugh at last to take his rightful place in the Palace of Westminster, and we thank all who donated to our fundraising efforts."

The portrait bust of Charles Bradlaugh was donated to the House of Commons by the National Secular Society, which Bradlaugh founded in 1866, and supported by very generous donations from our members and supporters.

Alison McGovern MP, Chair of the Speaker's Advisory Committee on Works of Art, said: "We are extremely grateful to the National Secular Society for their generous donation, which has allowed us to fill a long-standing and major gap in the Parliamentary Art Collection. Bradlaugh's perseverance in the face of opposition, his dedication to principle, and his steadfast determination to represent his constituents drove crucial changes in UK law. I'm sure Suzie Zamit's artwork will provide inspiration for both parliamentarians and members of the public for many years to come."

The bust was made by Suzie Zamit, who is the fourth female sculptor to have work represented in the Parliamentary Art Collection.

Zamit said: "I feel privileged as an artist to have had the chance to bring this visionary Victorian to life and to give recognition to a heroic man who worked tirelessly to achieve what he believed in - even in the face of adversity. After poring over every existing photo of Bradlaugh and reading Bryan Niblett's book Dare to Stand Alone, I was able to start piecing together a fuller picture of the man himself, and I relished the challenge. I found various written descriptions of his 'grave, quiet, stern, strong face'; his 'direct gaze and large blue eyes': his height and athletic proportions, and his great charisma and ability to command a packed hall. Political cartoons from the time were also invaluable, as features which are not so obvious in the stiffly posed studio photographs of the time were exaggerated and helped me to fill in the blanks.

"Bradlaugh's epic struggle to bring about the Oaths Act in 1888 was exhausting and took a severe toll on his health - resulting in his death at 57. But I decided I would portray him in his political and physical prime, and asked the National Secular Society for key words to define the qualities that most embodied him: Courage, Resilience, Far-sighted, Respect for Law, Daring, Defiant, and Humane. I hope I have managed to do him the justice he deserves!"

Charles Bradlaugh was first elected to the House of Commons in 1880 for the constituency of Northampton, and attempted to take his seat in the House on several occasions. He was prevented from taking the Oath of Allegiance in the House because of his well-known atheism, and was on one occasion imprisoned by the Serjeant-at-Arms in clock tower beneath Big Ben when he attempted to do so. The refusals prompted four successive by elections, each of which he won.

After six years, Bradlaugh was finally allowed to take the oath and take his seat in the House of Commons. In 1888, his Oaths Act passed as a Private Members Bill, ensuring that any future MPs who wished to do so would be able to take their seats in the House through a non-religious affirmation.

Following the unveiling on Tuesday evening, the bust of Charles Bradlaugh will be permanently installed at a prominent position in Lower Waiting Hall in the Palace of Westminster.

The portrait bust of Charles Bradlaugh was commissioned following a decision by the Speaker's Advisory Committee on Works of Art on 9 July 2013. The total cost of the commission, including VAT and expenses, was £15,000. This was underwritten by the National Secular Society.