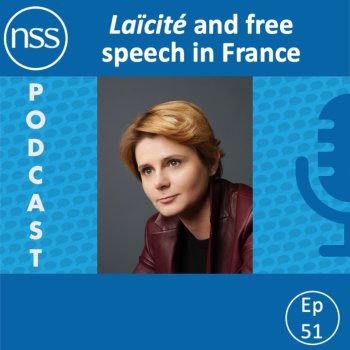 Satire is "the oxygen of a democracy," according to Caroline Fourest, a French writer, filmmaker, feminist, anti-extremist and former Charlie Hebdo journalist. Free speech, including satire, is a vital part of laïcité or secularism.

Secularist principles are deeply enshrined in French law and culture. In this episode, Emma Park speaks to Fourest about the place of these principles in France today, and the threat currently posed to them by Islamist extremism.

Fourest considers the role of Charlie Hebdo as a descendant of 19th-century satirical newspapers that were critical of Catholicism. She then discusses her personal experience of working at Charlie in the 2000s, and about the magazine's decision to republish the "blasphemous" cartoons of Mohammed originally printed in the Danish newspaper Jyllands-Posten.

Fourest argues that, for all satirical cartoons, the context must be considered – but that subversive humour has a vital place in a free society. She reveals the difficulties of getting a fair hearing in the British media, which often shrink from anything perceived as offensive. Her message is clear: we must be able to discuss "blasphemous" issues openly without fear of reprisals, and public figures must lead the way. If we are silent, the extremists have won.

Satire is "the oxygen of a democracy," according to @CarolineFourest, writer, anti-extremist and former Charlie Hebdo journalist. She speaks to @DrEmmaPark in the latest episode of the NSS podcast.
Click to tweet