Ep 47: Blasphemy in the classroom – The Batley Grammar case 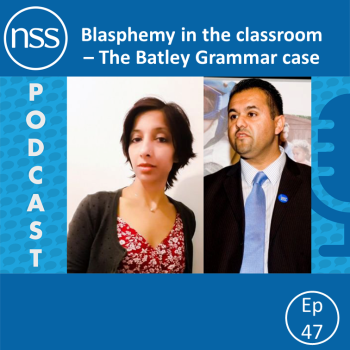 A Yorkshire secondary school recently decided to suspend and investigate a teacher for using a cartoon of the prophet Muhammad in an RE lesson on blasphemy, amid protests outside the school gates.

In this episode, Emma Park speaks to Fiyaz Mughal and Khadija Khan about the case.

Fiyaz Mughal is a British Muslim and director of Faith Matters, an organisation that works to resolve conflicts and strengthen relationships between faith communities. He explains why, as he wrote in the Spectator, the Batley protesters do not represent him. He and Emma discuss how material like the Charlie Hebdo cartoons or The Satanic Verses might be used in the classroom to enable pupils to see different points of view and make up their own minds. They then explore the reasons why liberal Muslims' views are often ignored by politicians and much of the media.

Khadija Khan, a journalist and commentator of Pakistani Muslim heritage, talks about the threat which a small number of Islamist extremists poses to freedom of speech in our society, and why this freedom is particularly important to those from minority communities. Khadija also describes her own experience of being threatened by extremists who wanted to silence her.

Finally, Emma is joined by the NSS's Stephen Evans to consider why freedom of expression and critical debate in the classroom are so important for secularists.

NSS podcast, ep 47: why Batley Grammar's suspension of an RE teacher for use of a 'blasphemous' cartoon is a blow to freedom of speech - and why it won't help minority communities.
Share this episode