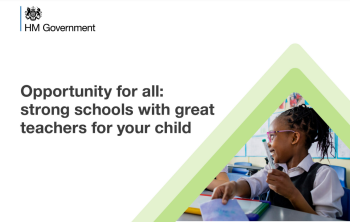 The government's new proposals for education reform in England could see increased discrimination, and most non-faith schools placed in faith-based academy trusts. Alastair Lichten explores the threat to secular education posed by the 'Opportunity for all' white paper.

'Opportunity for all' sets out the government's vision for the future of England's education system. But perhaps the biggest opportunity created is for further religious control of publicly funded schools.

The white paper published Monday contains a few positive proposals and potential opportunities for secularists. However, the central proposal – a renewed push for all schools to academise and join multi-academy trusts (MATs) – poses a grave threat to the future of secular education.

More funding for CofE and other faith-based academies

Establishing a new MAT has costs for any provider, but the paper singles out those "which Dioceses and other religious authorities face" and gives them special treatment by committing to "develop options for financial support". This would put anyone developing secular or community ethos trusts at a disadvantage.

We've long warned that the government's enthusiasm for faith based MATs risks replacing secular oversight of state schools with opaque religious governance. The established church hopes to see local education authorities "wither on the vine" so they can take over this role. In our 2018 report on academisation and its threat to secular education, we revealed almost half of non-faith schools in MATs where potentially governed by faith based trusts, and hundreds had become faith schools. The proposals risk seriously accelerating this trend.

While the paper claims that once moved into MATs "schools will retain their ethos", the DfE have continually failed to set out meaningful protections for the secular ethos of community schools. This is in marked contrast to proposals to protect what is euphemistically referred to as "statutory freedoms" for faith schools that become academies. We should be challenging, not entrenching, the 'freedoms' faith schools have to discriminate when selecting pupils, staff and governors, or when creating their curriculum.

The commitment to "ensuring that all providers of schools with a religious character remain able to open new schools, once all schools are in trusts" has two worrying implications. The most obvious is more non-faith schools taken over, or faith schools forced under tighter control. But this could also herald another attempt to introduce new 100% religiously selective academies.

Currently new academies (free schools) have a 50% cap on religious selection of their pupils. This has meant some religious groups (principally the Catholic Education Service) that wish to practice up to 100% religiously discriminatory admissions have had to propose voluntary aided schools instead. These face comparatively more scrutiny and opportunity for public opposition, so have been less successful. If the government want "all providers" of faith schools to continue opening new schools, and for all new schools to be academies, they may be preparing to weaken the 50% cap.

Protections for rural schools may also lead to increased religious control. Most rural primary schools are already faith based, and 47% of families in rural areas already face "high" or "extreme" restrictions on the choice of a non-faith primary school.

All these schools (faith and secular alike) may now need to join MATs, and Church run diocesan trusts are likely to be the only supported and established option. The idea of a community school free from church control could entirely disappear from large parts of rural England.

Mention of religious discrimination and selection is conspicuously absent. But any discussion of admissions reform provides an opportunity to get this on the agenda.

The NSS has been pivotal in challenging unregistered, illegally operating faith schools. These are often deliberately unregistered to avoid safeguarding or education quality regulation. The commitment to "introduce legislation" to strengthen Ofsted's powers in this area is welcome. But such reforms are overdue and need to be coupled with support for local authorities.

White papers set out broad principles not specifics. We will be engaging with the government over these proposals, seeking clarity where necessary, opposing greater religious influence, and supporting positive reforms. If you support our call for true equal "opportunity for all", then please consider joining the NSS, or supporting one of our campaigns.