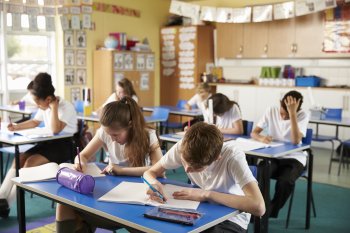 The Department for Education's protections for the secular community ethos of non-faith academies are inadequate. This enables a consolidation of religious control and undermines accountability, argues Alastair Lichten.

Religious privilege is built into England's school system, with around a third of state schools having a formal religious designation. But as the National Secular Society's 2020 report Power grab: Academisation and the threat to secular education found, religious control of education is also extending beyond these faith schools into those which are nominally secular. As the government seeks to turn all schools into academies, the community ethos of non-faith schools risks being eroded.

Among our findings in Power grab, we revealed that more than 2,600 former community schools are now in multi-academy trusts (MATs) with religious ethos and governance. Across the country, schools which supposedly have no religious designation are facing pressure to promote religious groups' interests. And in April, the education secretary announced a new pilot scheme to increase the number of C of E and Catholic multi academy trusts. This will risk exacerbating these problems.

We have raised these issues with the Department for Education for the last decade, but ministers and officials have not been responsive. They point to clauses in the funding agreements of mixed-MATs (which contain faith and non-faith schools) requiring that a community ethos formally be protected through the local governing body. These may protect against the introduction of direct religious discrimination or an openly denominational curriculum, but time and again we have seen religious MATs impose an informal ethos on non-faith schools under their control. This can include changes to extra-curricular activities, worship policies, or the selection of resources or training from faith-based organisations.

Theoretically you can complain to the Education and Schools Funding Agency (ESFA), as a trust failing to protect a school's community ethos could be in breach of its funding agreement. But given the limited official interpretation of those clauses, this would be a difficult case to make. To our knowledge, the ESFA has not upheld any such complaints. Part of the problem is the perception – encouraged by the C of E, our laws on collective worship and the structure of RE – that a community ethos should mean a school is generically Christian by default.

So, this month I wrote to Baroness Berridge, minister for the school system, asking her to set out meaningful protections for the community ethos of secular schools entering MATs. We're calling on the DfE to take three tangible steps to genuinely protect non-faith academies.

Firstly, we've made specific suggestions for changes to guidance for mixed-MATs and the model funding agreements mentioned above, so that a community ethos is properly defined and protected. Internal guidance may go further. But it's difficult for civil society to hold schools or the DfE accountable to standards which aren't made public. Making the protection of a community ethos more explicit should preclude the imposition of a faith ethos in such schools. Local governing bodies should report on and act to ensure all policies are consistent with the community ethos, including raising concerns where trust-wide policies may impact this.

Secondly, a school's community ethos should be inspected as part of its overall assessment. Faith bodies receive public funding to inspect 'their' schools to ensure they are promoting a rigorous religious ethos. The C of E and Catholic Church even have special arrangements with the DfE meaning they can force a re-brokering if they are unhappy with the protection for the ethos. Earlier this year we published research into the costs and impacts of these inspections in our report Religiosity inspections: the case against faith-based reviews of state schools There is no sectoral body representing community-ethos schools in the same way as the C of E's National Society or the Catholic Education Service, but ministers could require Ofsted inspections to ensure schools are promoting an inclusive community ethos. In 2010 the government removed a duty on Ofsted to inspect schools' promotion of community cohesion; this could help to address the gap this has left.

Thirdly, the DfE should work with appropriate partners to ensure that teacher, governor and senior leadership training provides advice and support on maintaining and developing a community ethos. If you want to take on almost any position in a publicly funded faith school, you will be required to support the ethos. This is reinforced throughout ongoing professional development organised by faith groups. Teacher training covers the importance of an inclusive ethos, but we're not aware of any comparable focus specifically on a community ethos.

These comparatively simple changes could make an immediate difference. In Power grab, we also called for more wide-ranging changes to remove the special privileges given to faith groups, to the detriment of community schools, during academisation.

Ultimately, we need a cultural change to ensure a community ethos is valued by officials and developed in all non-faith schools. While schools have a faith ethos, we also need to ensure this is not used as a free pass to do whatever they like. It's not just about protecting secular schools today, it's about showing how community schools can educate children from all religious backgrounds together, without pushing religious worldviews on them. This could help provide a model for the positive transition we need away from faith-based schooling altogether.

If you have concerns about academisation introducing or strengthening religious control over your school, please get in touch