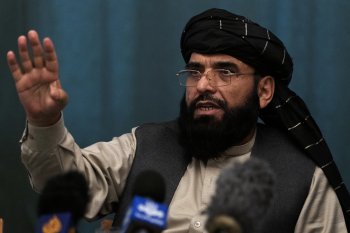 With the Taliban back in control, the return of repressive theocratic rule in Afghanistan looms large.

The Taliban's pledge to create an "open and inclusive" government has largely been greeted with the scepticism it deserves. Taliban mullahs say the rights of women in Afghanistan will be respected "within the framework of Islamic law". That is one hell of a caveat.

The last time they ruled, they barred women and girls from taking most jobs or even going to school. Women caught outside the home with their faces uncovered, or even wearing nail polish, risked public whippings or other degrading forms of punishment. Discrimination and violence, including killings, rape, abduction and forced marriage, were commonplace.

Reassurances that things will be different this time are unlikely to provide much in the way of hope or comfort. It's hard to regard such statements as anything other than propaganda ­– a ruse designed to win global approval.

Not least because even since the end of the Taliban's rule, over 20 years ago, its fighters and like-minded insurgents have continued their brutal assault on women. As recently as May this year, Taliban insurgents bombed the Sayed Ul-Shuhada High School in Kabul, killing at least 85, mainly schoolgirls. The previous year the Taliban murdered 24 women, children and babies in an attack on a maternity ward at a hospital in the Afghan capital.

Over the last 20 years hopes for the equal rights of Afghan women before the law may have been raised, but whatever progress there has been in the cause of women's equality looks likely to be swept away. Women are already being erased from the public square. Afghan women and girls are again living in fear for their liberty.

The Taliban's war is not just against women or a regime; it's a war against civilised values of freedom, justice, equality and tolerance. The Taliban's focus may be on ruling Afghanistan according to its interpretation of sharia law, but its takeover of Afghanistan will provide a massive morale boost to violent jihadists and religious fundamentalists the world over.

The Taliban takeover of Afghanistan is therefore a reminder of the need to resist religious power seeking, wherever it rears its head. It's no coincidence that the world's theocracies and Islamic republics ­– Afghanistan, Iran, Pakistan, Mauritania and Saudi Arabia – are amongst the world's worst human rights abusers. State religion is correlated with significantly higher levels of religious favouritism and lower levels of freedom of religion or belief, in terms of political rights, civil liberties and religious persecution.

The distressing destruction of hope in Afghanistan is a reminder of the fragility of freedom ­– and needs to serve as a wakeup call to better defend fundamental freedoms everywhere. Those of us able to enjoy relative liberty should never take it for granted. Instead, we should seek to ensure the same liberties are extended to people everywhere. The freedoms we have aren't ours to give away. They have been won by others before us - clawed away from theocrats, fascists, communists and other ideologues of all stripes by people brave enough to stand up to them. We owe it to them to do a better job of defending and enhancing them – wherever they come under threat.

In this week's parliamentary debates on Afghanistan Conservative peer Lord Farmer took the opportunity to have a swipe at secularism, claiming that its "root" is "simply a belief in the infallible 'me'". He added: "The disintegration of our spiritual backbone blinds us to the chaos all around us, and to its inevitable end-point: the decay and decline of the West."

But secularist principles of free speech; freedom of conscience, religion or belief for all; individual rights and autonomy are everything the Islamists rage against. Islamists reject the protection and freedoms offered by liberal secular democracies to women, children, religious, ethnic and sexual minorities, which remove their ability to oppress them.

Secularism's greatest gift is its ability to protect citizens from the imposition of other people's beliefs. The Taliban's objective of re-establishing the Islamic Emirate of Afghanistan is the very antithesis of secularism. It's also part of a wider global threat to secular liberal democracy, which is largely driven by religious extremism.

The Taliban's theocratic takeover has triggered a humanitarian crisis that will cause unimaginable hardship and distress. The international community must do all it can to protect those at risk. And collectively, we all need to do a better job of defending the principles that underpin secular liberal democracy. Because in an increasingly pluralistic world, they offer us the only realistic path to freedom and peaceful coexistence.

Image: Suhail Shaheen, spokesman for the Afghan Taliban, at a press conference in Russia earlier this year. © John Smith 2021/Shutterstock.com.