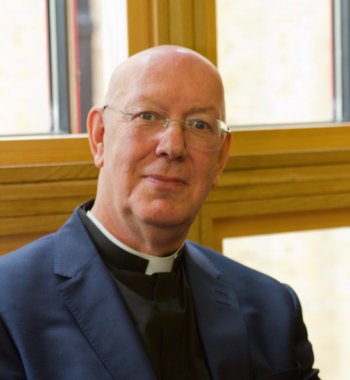 A coroner's report has laid bare the Church of England's cruel and scandalous handling of the case of Alan Griffin, who killed himself following unfounded accusations of child exploitation, says Keith Porteous Wood.

Last week a coroner issued a damning report into the tragic case of Anglican priest Alan Griffin (pictured), who killed himself in November 2020.

The report made clear that Griffin died as he couldn't cope with a Church of England investigation into his conduct. It said the investigation had dragged on for over a year, before he ended his life "without ever having the allegations and their source plainly set out for him".

The church's basis for investigating Griffin was "concerns of possible child exploitation". The coroner highlighted confusion and a lack of care in the church's safeguarding team over the way this allegation was registered. There were neither complainants, witnesses nor accusers. And the "source" was the casually collected verbal memoirs (described as a "brain dump") of a retiring head of operations (HOO).

The principal basis of the "concerns" was that Alan Griffin had supposedly admitted he had "used rent boys". C of E staff reported that the head of operations had used this phrase "from start to finish" in meetings and emphasised that these were "Father Griffin's own words". But under questioning from the coroner, it became clear that Alan Griffin "had not actually said this".

The HOO also told the coroner his understanding of rent boys was that these were "adult male prostitutes". Yet this alone became the pretext for the investigation into "child exploitation".

The coroner's report has now shown how groundless even the initial suspicions against Griffin were. The coroner ruled Alan Griffin: "did not abuse children"; "did not have sex with young people under the age of 18; "did not visit prostitutes"; and "did not endanger the lives of others by having sex with people whilst an HIV risk". She added: "No person said they had been the subject of or had witnessed any concerning behaviour, save that Father Griffin had been seen to have dinner with men in an Italian restaurant, for which he might have paid the bill."

The report has also highlighted further serious missteps from the church. The team of senior professionals who handled the case failed to "check the source of the information the HOO gave", or to "take responsibility for the adoption of most basic evidence-taking protocols".

In relation to sensitive data disclosed by the church to the Roman Catholic Church (RCC), to which Alan Griffin converted and became a priest, the coroner observed that "there seemed almost to be a lack of recognition that the RCC was a different organisation", seemingly raising data protection concerns. A complaint along these lines has been made by one of Alan Griffin's long-standing close friends.

The C of E's safeguarding officer shared the church's groundless suspicions by email with the RCC, even though they did not properly represent her view of the allegations; she did not believe that there was any evidence of sexual activity with a minor, nor any reason to investigate. She also gratuitously disclosed that Alan Griffin was HIV positive, but not that he "was being bullied by parishioners [and …] had "attempted suicide when diagnosed as HIV+"; nor that his HIV status was "viral load undetectable". The email was seen by the archdeacon and the safeguarding manager before it was sent.

The coroner also highlighted the risk that something similar could happen again, not least because output from the HOO's "brain dump" had become the subject of a report mentioning 42 members of the clergy of the London & Westminster Diocese.

The coroner noted that the C of E had not been fully engaged in the inquest process until last month. She said she often encountered organisations which had undertaken "meaningful attempts at improvement by the time of the inquest", but this was "not the case" with the church. The church only decided a review to learn lessons would be worthwhile once its staff had been called to the inquest as witnesses.

The coroner also found that C of E witnesses had undertaken a "lack of appropriately meaningful reflection", with the "notable exception" of a safeguarding adviser. And the coroner added that she had "received submissions on behalf of the Church of England regarding any prevention of future deaths report". These submissions – note the plural – had "impressed upon me that referrals to child protection and safeguarding professionals must not be reduced" and "urged me not to include any concerns that may be taken as a criticism of clerics or staff for not filtering or verifying allegations".

This last observation is by far the most concerning: the established church appears to have felt sufficiently entitled to attempt to interfere with the judicial process. And as the coroner noted, "a duty of care and competence in a situation such as this one is not in any way incompatible with the moral duty we all have, and the legal duty that bodies such as the church have, to try to keep children and the vulnerable safe".

The archbishop of Canterbury is now required in law to respond by 3 September. It will be significant to see whether he addresses questions including:

The Church of England's disregard for the safety of this priest, and the many serious errors it made in its reporting, were cruel. Its utter disregard for the duty of confidentiality that it owed Father Griffin when it passed these unfounded allegations to the Catholic Church – even when it knew they were untrue – was scandalous.

Once again, the church's conduct has highlighted a culture of entitlement, with devastating effects. Often when the C of E faces serious criticism, particularly over its conduct on abuse, it pays lip service to the need for lessons to be learned before reverting to protecting its reputation and continuing as before.

Last year, Archbishop Welby described the findings of the first public abuse inquiry as "profoundly and deeply shocking". Now, for the first time ever, a coroner has personally called him to account. Will anything change this time?