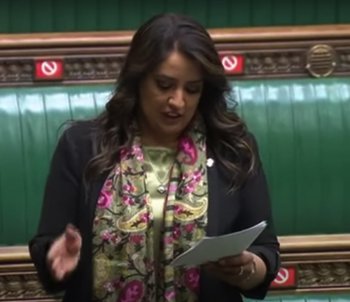 The Labour MP has effectively called for a blasphemy law as she highlighted the "emotional harm" caused by depictions of Muhammad. Freedom of expression on religion mustn't be up for negotiation, says Chris Sloggett.

A speech in parliament by Labour MP Naz Shah has set tongues wagging on social media this week.

Addressing the current police and crime bill, Shah highlighted the government's argument that courts should be able to recognise the "emotional harm" caused by damage to statues and memorials. Her party is opposing the bill, so you might have thought she'd critique this argument. But instead she expanded on it, by drawing a link to the "emotional harm" caused by cartoons of Islam's prophet Muhammad.

After saying that for Muslims, "there is not a single thing in the world that we commemorate and honour more than our beloved prophet", Shah added that it causes "unbearable" emotional harm when "bigots and racists defame, slander or abuse" him.

She went on to criticise cartoons explicitly and ask whether there should be a "hierarchy of sentiments". Her implication was that religious figures such as Muhammad were being denied equal protection to secular ones such as Oliver Cromwell and Winston Churchill.

On Twitter she topped this off with the hashtag "#NotJustACartoon". Her speech has been shared thousands of times – including, approvingly, by some other politicians.

Her argument is worth listening to, not least because it helps to draw attention to the much stronger case in reverse. It shows that justifying clampdowns on expression on the basis that they cause "emotional harm" opens the door to various censorious demands, as the writer Timandra Harkness noted.

But there's also a significant distinction between the two acts which Shah referred to. It's not criminal damage to draw a cartoon. Damaging a physical object in a public space isn't equivalent to creating a likeness that offends someone's sentiments. Drawing a cartoon that mocks Muhammad doesn't infringe on a Muslim's right to revere him unless, for example, you put the cartoon on the door of a mosque or a private home. Shah's case isn't an argument for equality; it's that all mockery of Muhammad should be off limits, for everyone.

Much of the response to the recent Batley affair appeared to assume that Britain doesn't really have to worry about blasphemy taboos and laws any more. Shah's comments are a reminder that this complacency is misguided. Whether she wants an explicit blasphemy law, or just an implicit one, the result would be alarming.

Allowing people to criticise, critique and mock religion has been fundamental to human progress. If people can laugh at a religious figure, they can challenge or disbelieve them, and they can think for themselves. If they can't, by contrast, the fundamentalists' demands will keep coming, as the Batley saga and the killing of Samuel Paty have shown in recent months alone.

The principled argument alone should be enough to defeat Shah's. But there's a risk that some in Britain see this issue purely as a tussle between competing communities. In recent years much of the response to rows over blasphemy has been marked by a patronising assumption that all Muslims are a monolithic bloc who will be offended. (Ironically there's a similarity between the arguments of parts of the multiculturalist left and those of the far right in that regard, although they differ on the way to respond.)

This is also a significant error. Restricting free speech harms minorities within Muslim communities, who may question or challenge aspects of their faith or wish to renounce it entirely. It empowers reactionary Muslim 'community leaders', and undermines the case for human rights in countries where reactionary forms of Islam are in power.

As Times columnist Matthew Parris put it during the recent Batley affair: "Who are the bullied here? The imams who cry 'persecution' because they think their version of Muhammad has been dishonoured? Or the youth at Batley Grammar who is beginning to question the cruel and rigid certainties he has heard in the mosque?"

A cohesive democratic society that values the rights of all its citizens should never accept the idea that any religious figure can be above criticism. The case should be made and remade: freedom of expression on religion isn't up for negotiation.