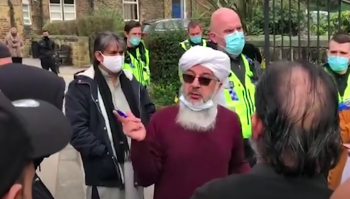 The start of an investigation into the Batley Grammar affair raises questions over the government's willingness to ensure assertive religious voices don't dictate what happens in classrooms, says Stephen Evans.

A few weeks ago, Batley Grammar School suspended a teacher who had showed a cartoon of the prophet Muhammad in a lesson, as protesters gathered outside its gates. The teacher was forced into hiding, and the case generated widespread publicity.

The school's priority seemed to be ensuring that loud voices in the local Muslim community weren't offended. This was also true of many public figures who took an interest in the case. Politicians and pressure groups lined up to denounce the use of a cartoon in a lesson. Often, they appeared more concerned about the use of a cartoon than the safety of a teacher and the prospect of mob rule dictating what could be taught in a school.

Now the academy trust behind the school has announced that an investigation has opened into the affair. This provides an opportunity to hear what happened in full, and to learn lessons. The trust has said the investigation will be led by an independent barrister with "significant education experience" and "no prior connection with the trust or any of its trustees or employees", which is encouraging.

However, the remit of the investigation may give cause for concern.

In a statement announcing the start of the inquiry, the trust said it would "examine how certain materials, which caused offence, came to be used" in the lesson. It didn't mention - at least explicitly - the school's treatment of the affected teacher. Are the offence-takers still framing the terms of the discussion?

The National Secular Society has sought clarification from both the trust and the Department for Education that the actions of the school are within the remit of the investigation. None has been forthcoming. The DfE simply said the specific terms of reference are a matter for the trust and investigator. This isn't good enough.

Fundamental principles are at stake. Cultural sensitivity can't be allowed to morph into censorship. Teachers must have the freedom to broaden pupils' horizons and encourage them to think critically. We can't allow decisions about the appropriateness of teaching resources to be influenced by offence taking, intimidation and threats.

The outcome of this investigation will have national implications. This episode has already sent a damaging message on teachers' ability to encourage critical thinking on culturally sensitive issues.

That could easily be forgotten if this is seen as a purely local issue, to be negotiated between assertive imams - who claim to speak for Muslims as a whole – and the individual school or trust.

So the government needs to show some leadership. But the Department for Education doesn't seem interested.

The trust has a legitimate interest in finding out what happened and taking recommendations. But it's also in the public interest to ensure the actions of the school are investigated. Feeling the heat from angry protests outside the school gates, the school issued an 'unequivocal apology' to the offended, deemed the resources to be 'completely inappropriate' and threw its teacher under the bus. If we take this imam's words at face value, the school even gave the protestors a role in drafting its statement. We need to know why this happened.

It's worth considering that a thorough investigation of the Batley affair may raise awkward questions for the government. The Batley affair is reminiscent of events at St Stephen's Primary School in east London in 2018. Then the school decided that girls under eight shouldn't wear hijabs in school, and young children shouldn't fast during Ramadan, on the basis that it was detrimental to their health and learning. Muslim pressure groups such as MEND and the Muslim Council of Britain became involved and the school was bombarded with emails in response, with some abusing and threatening violence against staff. The school was effectively forced to back down.

The Department for Education failed to support the school and said nothing on the row.

Arif Qawi, who was forced to quit as chair of governors following the affair, said he was "flabbergasted" at the DfE's silence. He wrote to the then education secretary Damian Hinds, pleading for help, saying that he and the school's head teacher Neena Lall had been "victims of absolutely vile personal abuse on social media platforms".

"This lack of support and weak attitude will be very detrimental to the nation's children," he said.

The DfE was also slow to respond when Muslim-led protesters objected to teaching about relationships and caused substantial disruption for primary schools in Birmingham in 2019. And when it issued guidance on relationships and sex education that year, it required schools to "take children's religious background into account" in their teaching.

We need to be sure that extremist elements within our communities are not impeding teachers' freedom and ability to prepare all pupils equally for life in modern Britain.

When protesters turn up outside the school gates and initiate harassment campaigns, schools shouldn't be left to fend for themselves. That leaves them at the mercy of the mobs and vulnerable to pressure from assertive, intolerant religious voices.

At least in Batley, the DfE issued a statement saying it was "never acceptable to threaten or intimidate teachers" and "schools are free to include a full range of issues, ideas and materials in their curriculum, including where they are challenging or controversial".

But condemnation only goes so far. The government has broader shoulders than any individual school or academy trust. So if ministers really want to uphold those principles, they should start by ensuring – if nobody else will – that an investigation considers the Batley episode in full.