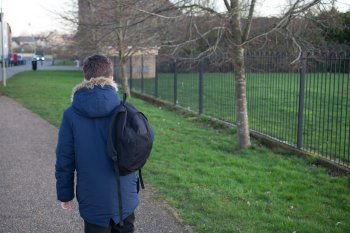 As the Scottish government confirms funding for a new joint campus between a non-denominational school and a Catholic one, Neil Barber says ministers should instead seek a unified, secular education system.

In Neilston, a village in East Renfrewshire, £30m funding has just been confirmed to build a new school campus by the end of this year. This will 'join' non-denominational Neilston Primary and Catholic St Thomas' Primary on one site.

Local people are understandably pleased by this investment, but with each school retaining its own head teachers, parent-teacher councils and as yet unclear religious customs or lack of them, is this good news for attempts to tackle sectarianism in Scotland?

A few months ago I was on a panel with religious leaders giving evidence to the Scottish parliament's Justice Committee about the flawed new hate crime bill. We were asked for suggestions as to how sectarianism could be tackled other than by the policing of hate crime. In response I said that all children should be educated together in integrated, religiously neutral schools.

To the nodding of the other religious leaders, the director of the Catholic Parliamentary Office, Anthony Horan, assured us that children were not taught sectarianism on a Sunday morning by their priest or minister. Of course children will rarely learn sectarian animosity from older people in a church setting, but put them in the jungle of the playground where they are desperate for acceptance and tribal belonging, and you have a whole new social petri dish.

Several joint campuses, which bring schools with different identities together in the same place, have opened or been proposed in recent years. Some policy makers in Northern Ireland also appear to have taken an interest in the idea.

In some cases the campuses may bring a feeling of small improvement to the status quo. When I researched the new school in Neilston for example, a journalist from the Barrhead News told me she'd heard the schools had already celebrated a joint Christmas art fayre. What's not to like about that?

However, there can also be significant drawbacks. A school which emphasises your differences from children whose parents are of another religion or who have none is bad enough, but imagine a school where the otherness of your fellow pupils is defined daily at close quarters!

A few years ago, plans in North Lanarkshire for several joint campus schools caused panic amongst Catholic officials who feared that "sharing of facilities like staffrooms will erode the Catholic ethos of a school". Politicians who supported the plans argued for the economics but also privately hoped for some softening of the sectarian divide sadly common in some parts of Scotland.

Despite this obvious benefit there was much concern about the free display of crucifixes, and separate entrances and facilities, including toilets, for teachers in the Catholic part of the school. Michael McGrath, who was the director of the Scottish Catholic Education Service at the time, vehemently denied that segregated schooling led to sectarianism, strangely claiming: "That's nonsense. Catholic schooling promotes diversity." Could it be that joint campuses often simply entrench segregation under one roof?

Remember that we are talking about the religious beliefs of parents here. Children are too young to understand the reasons for the separation they would experience, and have rights of their own. Articles 12 and 14 of the Convention on the Rights of the Child promote young people forming their own opinions about religious belief. Parents are of course entitled privately to discuss their personal religious views and choices with their children but these delineations should not be promoted in schools and certainly not tax funded schools.

Despite the well-meaning hope of many that building joint campuses is a 'step in the right direction', they are no substitute for all children learning and playing together in religiously neutral schools.

Even if politicians realise this, they have yet to wean themselves off religious block votes. The churches' power has been entrenched in Scotland's education system for far too long. Ministers should stand up to it.