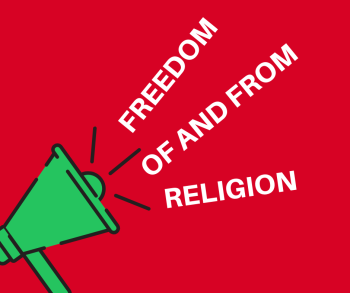 There was little sign of Christmas spirit in my inbox the other day when a Christian gentleman got in touch to accuse me of being a "Devil's advocate who wants to turn off the light of God's Son Christ message". What had I done to provoke his wrath? I suggested in a letter to the Telegraph that Christians shouldn't have a right to refuse to provide services to gay people.

The email arrived just as I was listening to the government's 'faith engagement adviser' talking about an "evangelical secularism" that wants to "close down faith".

And all this got me thinking about the gulf between what secularists say, and what many religious advocates hear, or claim to hear.

Another recent example of this phenomenon came when I suggested that places of worship shouldn't be privileged when it comes to public safety measures to suppress COVID-19. Anglican priest Giles Fraser translated this as me "gloating about churches being closed". When I explained that I actually want churches to remain open, so long as it is safe for those attending them, he simply responded with "I don't believe you". Nevertheless, I chucked some money in the pot to help rebuild his church hall which recently collapsed. It is Christmas, after all.

Like many others, Giles has created a fictitious bogeyman secularism, to help defend religious privilege. The essence of secularism is fairness, so a straw man secularism needs to be erected to effectively challenge it. So, in Giles Fraser's worldview, secularism becomes a "thin camouflage for anti-religious bigotry".

Many people who support the idea of a secular state may have an unfavourable view of religion – but that doesn't make them bigots. And many sincere religious believers are also persuaded by the advantages of a secular state. Whatever their personal views on religion, National Secular Society members unite around the principle that everyone should be free to believe whatever they like, and to live out those beliefs, as long as it doesn't inflict harm or impinge on the rights and freedoms of others.

But this live and let live philosophy isn't always shared by some of the loudest advocates for religious freedom. They loudly declare their support for freedom of religion, but they're less keen on its necessary corollary – freedom from religion.

Freedom from religion is the ultimate litmus test for a true commitment to freedom of religion or belief. Unless you equally support individuals' rights to manifest their atheism or live their lives free from religion, then it's likely to be religious privilege you support, not religious freedom.

And religious privilege is deeply ingrained in the UK, undermining freedom from religion.

Our head of state is the defender of the Christian faith. The Church of England is established by law. The Westminster parliament begins its sittings with Anglican prayers – as do some local authorities. Anglican bishops have an automatic right to seats in the legislature. National events have a distinctly religious feel.

Public money funds faith schools. A third of all schools have a religious ethos. The majority are Christian, and equality law exceptions mean many can prioritise children from Christian families in admissions. The children from non-Christian families who do attend these schools routinely have someone else's religion imposed on them. We even have laws requiring daily school worship.

And some Christians still claim 'marginalisation'.

Decades of declining adherence has made Anglican supremacy harder to justify. So, a multifaithism has emerged with minority faith and belief groups competing for crumbs from the establishment table.

Church schools have morphed into state-funded faith schools. Anglican chaplaincy in hospitals, schools, prisons and the armed forces has become multifaith. There are even calls for other faith leaders to join Anglican clerics on the 'bishops' bench' in the Lords. The Church of England is willing to see its privileges extended to other faiths – but can't accept them being removed.

Multifaithism may make Christian privilege seem less egregious, but it completely neglects those who aren't so assertive about their beliefs ­– the majority – who eschew religious labels. The religiously indifferent are simply expected to put up with other people's beliefs being foisted upon them.

Secularism's proposition is to level the playing field. It's not about closing down faith, but making it a personal matter for individuals, and not the business of the state.

So, whenever you hear a straw man secularism being erected, you can be sure that someone, somewhere, wants to impose their religion – either on a person or public policy – where it doesn't belong.

Religious diversity, like all other forms of diversity, should be a welcome component of society. But we don't have to – and nor should we – organise public policy, services and state occasions around it. Fuelling identarian politics is divisive and unlikely to end well.

Focusing instead on our common humanity and what we share as citizens is a more cohesive approach. Secularism is the best recipe for living better together.

At Christmas, now a largely secular affair, Christian anxieties about declining influence often come to the fore. For some, Christmas is a sacred religious holiday that marks the birth of Jesus Christ. For others it's family time – or something closer to its origins, a period of merriment, feasting and gift giving to mark the winter solstice. For some, Christmas just isn't a thing.

Secularists have often been accused of trying to take the Christ out of Christmas. But no sensible person wants to stop people choosing to mark religious festivals if they wish to. And the truth is, people vote with their feet. Secularism simply gives people the freedom to decide for themselves. And that really is something to celebrate.

So, however you decide to spend the upcoming holidays, take care of yourself and others. And may next year be better than the last.