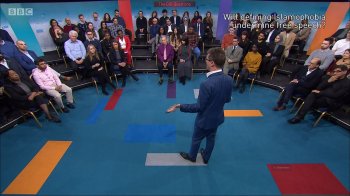 A BBC debate on defining 'Islamophobia' was a reminder of the risks of giving too much ground to religious identity politics and empowering 'community groups' to police public discussion, says Chris Sloggett.

On Sunday the BBC One programme The Big Questions turned its attention to the all-party parliamentary group on British Muslims' definition of 'Islamophobia'. Since November 2018 political parties, local authorities and others have adopted this vague definition. For those not yet aware, it reads: "Islamophobia is rooted in racism and is a type of racism that targets expressions of Muslimness or perceived Muslimness."

The National Secular Society has warned that accepting this will further restrict public discussion on important issues, where debate is already often frustrated by inappropriate accusations of bigotry and self-censorship. So far the government has resisted the rush to adoption. This has upset the APPG, and the debate on The Big Questions was prompted by its member Sayeeda Warsi once again criticising the government's position.

But rather than proving her point, the debate further served to highlight the risks associated with adopting the definition. The pro-definition panellists paid lip service to the right to criticise religion, but added qualifiers which are open to abuse. Academic Maryyum Mehmood said the "manner and decorum" of speech was "vital" in judging it. She suggested speech becomes "problematic" when "things are said in order to provoke or incite hatred". At one point she appeared to conflate speech with violence, as she said "terrorists, far right extremists, use those words to commit atrocities".

Meanwhile 'diversity project officer' Sajidah Ali said there was "a culture in this country where it is legitimate to criticise Islam and people can get away with it", claiming this "incites hatred".

And the academic Tariq Modood – who drew up five 'tests' designed to determine whether speech is acceptable, which are cited in the APPG report – addressed the question of whether people should be able to call Muhammad a paedophile. He said those who want to do so should "produce the evidence", adding that the argument was "offensive, aggressive and not part of a reasoned debate". As Emma Webb of Civitas pointed out in response, not everyone who comments on Islamic history is likely to be an academic.

At one point Mehmood said the definition was "necessary" because "a lot of people don't actually know what Islamophobia actually means and what it entails". This begged the question of why the definition's advocates refuse to use a clearer term, such as "anti-Muslim hatred", in place of 'Islamophobia'. It was also not credible, as the pro-definition panellists' contributions repeatedly obscured the line between criticism of religion and bigotry against people.

And who gets to decide what Islamophobia "actually means"? Nobody has the power to define words on behalf of others. On the show ex-Muslim activist Jimmy Bangash passionately argued, with some justification, that Islamophobia is routinely used to silence dissenters from Muslim orthodoxy. His definition of the word would be very different to the APPG's; adopting the latter effectively tells him his view is illegitimate.

That may seem semantic and pedantic. But it points to a more significant problem when officialdom is trying to move the goalposts of public discussion, in line with the sometimes contentious views of 'community groups'.

The current Labour leadership debate has also highlighted the risk that religious identity politics will render legitimate questions and ideas out of bounds. Last month all five candidates for the leadership (including the now departed Jess Phillips and Emily Thornberry) signed up unequivocally to series of pledges from the Board of Deputies of British Jews and the Muslim Council of Britain.

Some of the MCB's pledges in particular would substantially restrict public debate and policy. Along with adopting the APPG Islamophobia definition, the pledges could easily undermine animal welfare, counter-terrorism and relationships and sex education.

The board's pledges focus on the narrower issue of Labour's handling of anti-semitism. But they include lines which could have adverse implications, for example for dissenters from Jewish orthodoxy, depending on how they're interpreted.

Was there no room for a party in the middle of a leadership contest to debate what the policies they adopt actually mean? Are we prepared to believe all five candidates, representing various factions of the Labour party, genuinely thought all 20 measures proposed by the BoD and the MCB were so brilliant that they should be adopted verbatim and without qualification? Should one of Britain's senior political parties entirely contract out areas of policy to groups with partisan interests? And if so will it do the same for other groups – Hindus, Sikhs or Christians, for instance?

These are uncomfortable questions. And in the last week we've had several reminders of the legitimacy of concerns about anti-Muslim bigotry and anti-semitism. Last night's attack on shisha bars in Germany was another deadly reminder of the threat posed by the far right. Just days earlier 12 people were arrested in the same country for planning attacks on mosques, politicians and asylum seekers. This week a documentary presented by the comedian David Baddiel highlighted the fact that as many as one in six people around the world are Holocaust deniers.

Those from particular communities, and their allies in public life, have a legitimate role to play in bringing these issues to public attention and proposing measures to resolve them. But they can't be the only contributors and they can't have a blank cheque to close down discussion, even when the topics in question are sensitive. If we lose sight of the right to dissent and the importance of a free and open exchange of ideas, respect for our democracy, parties and institutions will suffer. And that'll be bad for everyone – no matter what their religious affiliation.

So where will the reasonable, consistent pushback come from? And how far will we let politicians go down the hole of religious identity politics before we tell them to stop digging?

Image: screenshot of the debate on The Big Questions, BBC One.