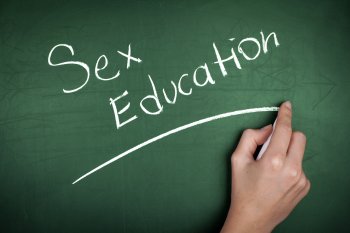 The controlling nature of the ultra-Orthodox Charedi Jewish community came to the fore again towards the end of last year, when the state funded Yesodey Hatorah Senior Girls' School in north London was caught pressurising parents to opt their children out of sex education.

In 2017 the government said it would extend compulsory sex education to all secondary schools and introduce relationships education for all pupils from the age of four. That policy was greeted enthusiastically by educationalists and children's rights advocates alike. Like the vast majority of parents and young people, they recognise the importance of RSE in ensuring children from all backgrounds can build positive and safe relationships.

And for that reason secularists warned against diluting regulations to suit religious interests. Regrettably, the government did just that. The Department for Education announced that schools would have to take pupils' religious background into account when planning teaching and that faith schools could 'reflect their beliefs' in their teaching. It also gave parents a right to request withdrawal of their children from lessons. Religious lobby groups, including Orthodox Jewish educators, claimed a major victory.

Our warnings were echoed last month by the mother of a pupil at Yesodey Hatorah school during a BBC exposé of efforts to avoid teaching RSE there and at another Orthodox Jewish state school in north London.

Speaking to the Victoria Derbyshire programme, she said: "The truth is our children need sex education more than any other child in the country because our community is so insular. There is no other way in which a child in this community could learn about healthy sex and relationships."

Yehudis Fletcher, a spokesperson from the counter-extremism group Naḥamu, told the programme that "without sex education many girls from orthodox backgrounds don't find out what sex is until they're expected to have it".

But within this community there is a 'Charedi Taliban' with little regard for personal autonomy.

Anything it sees as a threat to its authority – whether from inside or outside the community – is treated as an existential threat, and it goes to extraordinary lengths to maintain insularity and prevent interaction with the outside world.

As part of this pupils at ultra-orthodox schools, even state-funded ones, are shielded from knowledge about evolution and how their bodies work – with schools even censoring exam questions on human reproduction.

As so often in fundamentalist strands of religion, women are subjugated – viewed as breeding machines and subservient wives. Young girls are routinely denied access to or information about contraceptives by religious authorities. The birthrate among Charedi Jews, at six to seven children per woman, is more than three times greater than the national average.

Coercive control within the community is maintained by inculcating fear of outsiders and intolerance of difference. Earlier this year mothers with children at the state maintained Yesodey Hatorah were summoned to a meeting to make them "aware of extremely disturbing trends in the local community". Speakers lamented the moral failings of mothers who complained or "exposed their children to secular influences".

In a secret recording of the meeting obtained by the National Secular Society, speakers said "the values we want to pass along" are "not the values that Ofsted are telling us to pass along". One speaker shamelessly said the current "threat" was unmatched by anything in "the last 200 years". Similar hyperbole is used by the divisive Charedi activist Shraga Stern, who says many Jews will leave Britain if faith schools have to teach children about LGBT people.

The orthodox Charedi community, like Muslim groups leading protests outside schools in Birmingham, are particularly incensed by an expectation to teach about the existence of LGBT people. The government sought to placate them by providing loopholes that may enable faith-based schools to avoid teaching LGBT content. For example, the DfE's guidance states that "enforcement action will not normally occur if there are only one or two unmet requirements from the standards".

Policymakers ought to put young LGBT people's health and wellbeing, and society's interest in young people understanding their existence, above the demands of religious hardliners. Because living within such strict conformity can be desperately claustrophobic – and sometimes catastrophic.

Writing in The Jewish Chronicle, Daniel Sugarman points to tragic cases where "frum [Orthodox Jews] have taken their lives, citing their inability to reconcile their LGBT status with their orthodoxy as one of the reasons for this awful, desperate decision".

A trans woman from the ultra-Orthodox community was even denied access to her children because a judge accepted that the children would be so ostracised by the community if they so much as met up with their trans parent that it was too much of a risk to their wellbeing.

To most of us, such attitudes will be regarded as heartless and inhumane. To his credit, the chief rabbi acknowledged the LGBT people who "endure deep unhappiness and distress due to the mistreatment and hurt they experience" and issued guidance to schools to help them recognise the existence of such people and meet their welfare needs.

And last year a group of senior progressive rabbis signed a letter urging the government not to retreat from plans to ensure that children are taught about LGBT issues. They warned that diluting guidelines that independent schools "must teach respect for LGBT issues" posed "a significant safeguarding risk to LGBT young people, who are still subject to significant levels of homophobic, biphobic and transphobic bullying".

But Charedi campaigners remained intransigent and the guidelines were subsequently watered down.

A mother whose son was shunned for being gay perfectly illustrates the disingenuous nature of ultra-Orthodox campaigners' arguments:

"Those with a stake in Charedi education in this country are falling over themselves trying to gain high level access to Ofsted and the DfE to ensure that children will never need to learn that some families have two mummies and some have two daddies. But come Yom Kippur afternoon, those same children will all be sitting in shul listening to the reading of Leviticus 18:22, the Torah source for forbidding sex between two men."

The prejudice and intolerance within the Charedi community shouldn't be indulged or accommodated. To do so is a betrayal not only the rights of children growing up in these communities, but also the Jewish reformers campaigning to challenge and confront the extremists within.

Charedi activists claim it would be a breach of the religious rights of traditional Jews to make them teach topics that conflicted with their religious ethos. Such faux religious freedom arguments need to be exposed for what they are. Religious freedom is not absolute. Your religious freedom ends where another person's human rights begin. Religious tolerance shouldn't lead us to turn a blind eye to the children growing up in suffocating and abusive environments. To abandon them would be the bigotry of low expectations.

The government was right to introduce LGBT inclusive compulsory sex education. Now it needs to ensure that religious extremists aren't allowed to undermine children's independent human rights by denying them access to it.