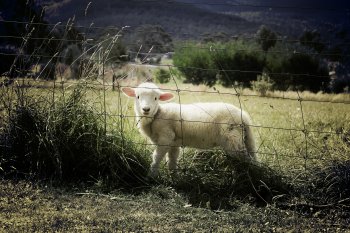 Farm animals may suffer much during their lives, especially if they are bred for high productivity and kept in factory farms. Their final transport to the abattoir and subsequent slaughter is only a small proportion of their lives.

But as they are sentient beings capable of suffering, we should not only rear farm animals to the highest standards of welfare, but also ensure the least possible pain and fear at the time of slaughter.

There are core animal welfare principles regarding slaughter. The animals should be stunned (i.e. rendered unconscious) before their throats are cut so they do not suffer any pain or terror during the cut and whilst bleeding out. Stunning should produce immediate unconsciousness, lasting until the animal has bled to death.

There are various stunning methods for different animals. Cattle are usually stunned by captive bolt – a retractable metal bolt is fired into the brain and the animal is stunned and drops down unconscious. Sheep and pigs are often stunned by electrical tongs applied to the head. Chickens may be stunned by gas, or by being plunged into an electrified water bath.

There are many scientific studies demonstrating that animals survive for a considerable period of time after their throats are cut. This is why the law generally requires that we stun animals, to spare them this agony.

The European Union slaughter regulation of 2009 (a council regulation) says animals must be stunned before slaughter. However, it allows countries to make a derogation regarding animals being slaughtered for religious communities. This means that Muslims and Jews can slaughter animals without stunning for halal and kosher meat.

Although a number of EU countries do not permit non-stun slaughter under any circumstances, the UK does make exemptions for halal and kosher slaughter in its animal welfare legislation.

In its 2004 report on animal welfare in slaughter, the European Food Safety Authority stated there is "a high risk that animals feel extreme pain during the cutting of the throat". They found that without stunning, it takes up to 20 seconds for sheep to fall unconscious after their throats have been cut. It takes up to two minutes in cattle, and more than two minutes in poultry.

The suffering caused by non-stun slaughter has prompted many expert welfare bodies to call for all animals to be stunned, without exception. This includes the UK government's Farm Animal Welfare Council, which has said that throat cutting of an un-stunned animal "would result in very significant pain and distress in the period before insensibility supervenes".

There is no absolute consensus in religious communities regarding stunning before slaughter. Both Islam and Judaism have teachings that stress animals should be respected.

Compassion in World Farming's view is that animals should be slaughtered by the most humane method available. For this reason, we oppose all slaughter without pre-stunning as well as poorly executed stunning. We do not oppose religious slaughter when animals are pre-stunned. It is worth noting that most animals slaughtered for halal meat are stunned, but not always correctly – this too needs reform.

Unless action is taken to prioritise animal welfare at the time of slaughter, the problem of animals suffering unnecessarily cruel deaths is likely to increase. Over 70bn farm animals are slaughtered per year worldwide and this figure is predicted to increase massively. That's why we need an urgent re-examination of our laws to ensure the welfare of animals comes first.

Joyce D'Silva delivered a presentation on non-stun slaughter at the NSS's Secularism 2019 conference. You can watch it here.

Image by Benjamin Nelan from Pixabay.

Dr Joyce D'Silva is ambassador emeritus and former chief executive of Compassion in World Farming. The views expressed in our blogs are those of the author and do not necessarily represent the views of the NSS.

Jewish and Muslim sensibilities about ritual slaughter are given protected status, despite these practices being inhumane. Matthew Syed argues that religious exemptions in this area are a slippery slope...