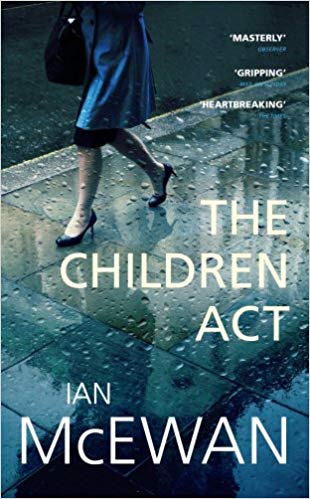 Emma Park says Ian McEwan's book and the film it has inspired prompt the questions of what the state should do when a young person's religion conflicts with their welfare, and how this affects religious freedom.

Does the state have the right to prevent children from refusing medical treatment on religious grounds? This is the question at the heart of The Children Act, a film released in the UK in August this year, directed by Richard Eyre and starring Emma Thompson as Fiona Maye, a judge in the family division of the High Court. The film is closely based on a 2014 novella of the same name by Ian McEwan, who also wrote the screenplay.

Maye is called upon to decide whether a seventeen-year-old Jehovah's Witness, Adam Henry, who is on the point of dying from leukaemia, is entitled to refuse a blood transfusion which could save him. Adam and his parents, devout members of the sect, believe that transfusions are a sin.

They argue that Adam's beliefs should be respected by the court, even though he is legally still a minor. They are opposed by the hospital where Adam is being treated and by his social worker.

After hearing submissions from all parties, Maye takes the unusual step of visiting the boy in hospital, to understand what exactly his beliefs are, and to determine whether he is 'competent' to refuse consent. Unexpectedly, the two of them, so different in background, age and belief, strike up a rapport. Maye does not convince Adam to change his mind, but since he is a minor, she rules that the court, in its role as parens patriae, 'parent of the country', may overrule his wishes in the interests of his own 'welfare', in accordance with section 1(1) of the Children Act 1989.

She therefore permits the hospital to give him the transfusion.

After the operation has been successfully completed, Adam breaks with his religious community and turns for support to Maye, the wise adult and first woman in his life, by whom he has been rescued – or damned. He starts sending her letters (in the book) and waiting for her outside court (in the film); eventually, he pursues her up to Newcastle, where she is on circuit.

On a stormy night he turns up at her hotel, drenched with rain, and reveals he has renounced his faith and has a renewed appetite for life. He then begs Maye to let him come and live with her and her husband. She refuses and, by sheer force of personality, persuades him to return to his parents. As he is about to leave, they spontaneously kiss on the lips – upon Maye's initiative (in the book) or Adam's (the film).

The next thing she hears of him, a few months later, is that he has had a relapse and is in hospital again. This time, though, he is eighteen and beyond the court's wardship jurisdiction. He refuses a transfusion, and dies; Maye feels responsible.

The legal case behind the story

The factual basis of The Children Act was a real case in the Family Court from the early 1990s which was heard by a friend of McEwan's, Sir Alan Ward: Re E (A Minor) Wardship: Medical Treatment.

Ward was also legal adviser to the film of the book. In the real case, as he describes in a Telegraph article, Ward not only visited the boy in hospital but, touchingly, after the operation was over, arranged for him to watch Tottenham, his favourite football team, from the director's box, and meet Paul Gascoigne and Gary Lineker. It was not until nearly two decades later that Ward learnt that the boy had had a relapse in his twenties, and, tragically, died after refusing a second transfusion.

McEwan's narrative retelling of Re E adheres reasonably closely to the facts of the case. But his use of two fictional characters as the protagonists brings the story to life.

Maye is a highly driven, successful judge who has rejected the opportunity to have children in order to focus on her career. Her marriage is going through a difficult period: her husband, Jack, an academic historian, has decided to have an affair because her career is interfering with their sex life.

McEwan uses Maye's vulnerability, together with her isolation as a judge, as the starting point from which to weave a thread of repressed sexual tension into her relationship with Adam, who is also, because of his illness, isolated from those around him. The boy in the original case was just under 16; McEwan's Adam is two years older, presumably in order to make the sexual element more credible.

McEwan has compared the best legal judgments, such as Re E, to short stories.

His book retains something of a judgment's cerebral quality, especially in its focus on Maye's internal reflections; Adam is treated as an intellectual puzzle to be pieced together through his letters rather than dealt with in person. At the end, Maye reflects that Adam "came to find her, wanting what everyone wanted, and what only free-thinking people, not the supernatural, could give. Meaning." This conclusion, which is clearly endorsed by McEwan, seems to be an instance of 'sympathy extended towards those whom the narrative would not favour', a technique which he has argued is used by judges and novelists alike.

It comes across, though, as sententious: it is certainly not obvious that 'free-thinking people' have a monopoly on meaning.

In the film, Adam is given a much more active role. We see clips of his home life, and changes in his complexion and mien which reveal the emotional turmoil he is undergoing. This risks sentimentality, but on balance is more emotionally engaging; he has become a real person rather than a problem. Unlike the book, the film also strenuously avoids passing judgment on the Henrys, despite their willingness to let their teenage son die for their beliefs – a trait with which it is very difficult for non-believers to sympathise. Nonetheless, it is refreshing to be left at the end with no didactic 'answer' – just Adam's burial in a London churchyard.

Religious freedom: How far should it be permitted to people under 18?

The Children Act – the book and even more so the film – powerfully brings out a real dilemma facing the judge in a secular, tolerant society like the UK, in his or her capacity as the 'reasonable parent' of a child whose real parents are accused of inculcating their child with unreasonable beliefs. The dilemma is: how far should the court be able to interfere with a young person's religious freedom?

As the European Court of Human Rights has stressed, "freedom of thought, conscience and religion", which also includes the freedom not to believe and, under normal circumstances, the freedom to manifest one's beliefs in actions, is "one of the foundations of a 'democratic society'".

The implicit argument at the heart of The Children Act, as also in Re E, is that young people under 18 are not entitled to the same religious freedom as adults because they are not yet capable of making a truly free choice about their beliefs and actions. Therefore the claim that enforced medical treatment is a violation of human dignity would have less weight in the case of a young person than of an adult, because young people's beliefs are less fully formed and less stable than adults', and so less central to their identity. It may be that a young person's beliefs will not change after he turns 18, as was the case for the boy from Re E. But, while he is under 18, the law should still treat his beliefs as capable of change.

Some would argue that this is paternalistic; a normal teenager of 16 or 17 knows perfectly well what he believes and wants. Judges themselves have been increasingly wary, in recent years, of imposing upon children their own views about welfare.

But is it right to burden teenagers, who have enough problems to deal with in simply growing up, with the responsibility to choose whether to accept life-saving medical treatment – in short, to choose whether to live or die? Would it have been better for Adam Henry if Maye had allowed him to die the first time round? Adam's vivid portrayal in the film of The Children Act cannot but make us feel that here is a boy who, in his heart of hearts, desperately wants to live. Maye herself holds that "his life is more precious than his dignity". It would take a judge of very rigid principles indeed to put his 'dignity' first.

Read the book | Watch the film | Discuss on Facebook

Emma Park is a freelance writer and an NSS member. Follow her on Twitter: @DrEmmaPark. The views expressed in our blogs are those of the author and do not necessarily represent the views of the NSS.