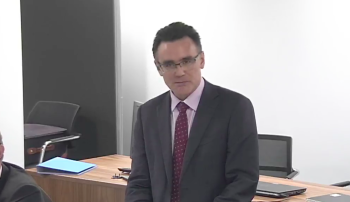 Opening statement by lawyer Richard Scorer of Slater and Gordon, also an NSS vice president, at the IICSA inquiry's hearings into the case of Peter Ball, the former bishop of Gloucester.

Chair and members of the panel: Mr O'Donnell and I represent five survivors of abuse by Peter Ball. They and others known to the police probably represent only a fraction of Ball's victims. The true number may never be known. But what is now very clear is that in the Church of England, Peter Ball found the perfect cover for his offending. If a charlatan with an insatiable appetite for abuse wanted to secure a continuous supply of vulnerable young victims, there was no better way of achieving this than by founding a religious order not subject to any external supervision, and by making his victims' participation in the abuse a religious duty obligated by their oath of absolute obedience. Not for the first time, theology and religious ritual provided the ideal mask for abuse, with the evil of what Peter Ball did being compounded by his nauseating claim that the abuse was spiritually uplifting.

Most of all, however, Peter Ball found in his fellow bishops in the Church of England the perfect accomplices, prepared to turn a blind eye to his abuse over many decades, to collude in the lie that the abuse of Neil Todd was an uncharacteristic aberration, to cast doubt on Ball's guilt, to smear his victims, and to rehabilitate him.

It is now clear that for many years before the 1992 investigation, there were many in the Church of England who knew of or must have suspected his offending, and decided to turn a blind eye to it, and later tried to evade their own culpability by claiming that Ball had never really offended at all. Eric Kemp, the Bishop of Chichester, was aware of serious concerns about Ball well before 1992, yet in 2006 he repeated the lie that Ball's resignation had been the "work of mischief makers".

However, of the senior leaders of the Church of England, none bears greater responsibility for this appalling saga than Lord Carey. I fear that when we hear from him this week the usual litany of excuses will be trotted out. The past is apparently another country in which nobody really knew or understood that sex offending was wrong. We hope you will treat these self-serving excuses with the contempt they deserve. Over the next few days we will hear about the events of 1992-1993, the investigation into the abuse of Neil Todd, and the seven letters received by Lambeth Palace alerting them to other evidence of abuse by Ball. We will debate the significance of those letters, and the failure by Lambeth Palace to hand them over to the police. As an aside, I remind you that the only reason we have that debate is because the law in this country still allows institutions to sit on evidence of abuse and to decide not to pass it to the statutory authorities. We have no mandatory reporting law, and those letters were duly concealed.

However, whatever view you take about that, we know that on 5 February 1993, in the knowledge of that other evidence, Archbishop Carey wrote to the Chief Constable of Gloucestershire regarding the allegations against Ball. In that letter, Carey asserted about the Neil Todd allegation that if Ball "is guilty of unprofessional behaviour it is quite unrepresentative of his style".

Unrepresentative: this was Lord Carey's choice of word about the Todd allegation when in fact he was well aware of other allegations. The Gibb report concludes that Lord Carey's language "must give rise to the perception of deliberate concealment". We look forward to hearing from Lord Carey on this point. In the three statements he has filed with this inquiry, Lord Carey ducks this issue entirely. But to our clients this language was deliberate misrepresentation of the known facts, designed to protect a fellow Bishop from justice. It is bad enough that evidence was withheld from police. It was positively dishonest to misinform the police that the allegation they were dealing with was unrepresentative of Ball's behaviour, when Lord Carey knew very well that there was evidence demonstrating the opposite.

Chair, these issues matter a great deal to our clients. With the 1993 caution, Peter Ball escaped justice for 22 years. Neil Todd took his own life. Lord Carey needs to acknowledge his part in these outcomes. Despite his pretence at an apology to the victims in his statement to the Gibb inquiry, there is no real sign that he does so. Even in November 2014, when it must have been obvious to any reasonable observer that Ball was a charlatan and a fraud, Lord Carey wrote again to the police claiming that Ball had "served the church with great distinction" and opposing any further criminal charges.

In Lord Carey's behaviour throughout this dreadful saga, we see clericalism in its purest form. The loyalty of bishops and priests to each other overriding basic norms of right and wrong. We note that Lord Carey's autobiography is entitled "Know the Truth". When he comes before this inquiry tomorrow, we respectfully urge him to stop the dissembling, the excuses and the half-truths, and to take this final opportunity to give an honest account of his actions, and to recognise how profoundly wrong they were. Those who have suffered so grievously from Peter Ball's behaviour deserve nothing less.

Chair, the Church of England hierarchy bear most of the blame in this case. But there are others who feature in this story - from parliament, from the judiciary, and from the monarchy - who also have much explaining to do. Our clients want to know why the police and CPS failed so badly in 1993. Because the Church of England is the established church, its leaders enjoy access to a nexus of establishment connections, patronage and privilege, and in evading justice for two decades Peter Ball drew fully on these resources. One of his supporters was Lord Lloyd of Berwick, the former Law Lord. Our clients have seen his extraordinary letter written in support of Ball on 2 February 1993. In his statement to this inquiry Lord Lloyd implies that this was a character reference for sentencing purposes. However, this letter was written before the CPS had decided whether to charge Ball, and therefore at the time that it was written it cannot have been written for sentencing purposes. Despite Lord Lloyd's claim in the letter that he was not seeking to influence the police, it is difficult to see how the letter had any purpose other than to dissuade the Chief Constable from charging Peter Ball. Moreover, given his position as a senior member of the judiciary Lord Lloyd would have been well aware that writing to the police would inevitably be an act of influence. If there was no intention to influence, then why write the letter at all?

The inquiry has also received a letter from His Royal Highness the Prince of Wales. We wish to register our surprise and concern that the Prince has chosen to put his evidence before the inquiry in the form of a letter as opposed to a witness statement verified by a statement of truth in the normal way. This will feed concerns that the letter is less than entirely frank about his relationship with Peter Ball. My clients fully accept that Prince Charles has many interactions with Church of England clergy. He cannot be responsible for the behaviour of all of them. However, he chose quite deliberately to maintain a relationship with Peter Ball after Ball's resignation as a Bishop. This included gifts of money to the Ball brothers, and the provision of accommodation on the Dutchy estate. HRH was funding and accommodating a man who had been cautioned for a sex offence. In justifying this relationship, Prince Charles claims that he "was not aware at the time of the significance or impact of the caution that Peter Ball had accepted". He goes on to say "I was not aware until recently that a caution in fact carries an acceptance of guilt". With all due respect to HRH, my clients find this explanation frankly astonishing. The Prince of Wales has access to the best legal advice that money can buy. The Crown prosecutes people in this country everyday on the principle that ignorance of the law is no defence. Later in his statement Prince Charles tells us that "I have always taken the view that the judicial process should take its course. I am then able to ground my opinions in facts tested by law, rather than hearsay". But of course there had been an outcome to the judicial process in 1993. Ball had admitted his guilt, a fact that had been heavily publicised in the national press. Yet Prince Charles apparently decided not to seek clarification of the legal position. To my clients, this staggering lack of curiosity looks like wilful blindness. The Prince claims he was "deceived about the true nature of Peter Ball's activities", but the fact is that he could easily have made efforts in 1993 to check the legal position, he had every opportunity to do this, but he chose not to. Knowing that people can take his name in vain, and knowing that his support would have emboldened Ball in seeking a return to preaching and officiating, Prince Charles had a particular responsibility to check the facts and the law. He failed in that responsibility and as such he failed the victims of Peter Ball.

Chair, we cannot allow a situation in this country where high profile sex offenders can evade justice because of who they know. Over the past few years, we have all heard many allegations that the British establishment has protected prominent paedophiles from justice. No doubt some of those allegations will turn out to be overblown or without substance. In the case of Peter Ball, it is plain beyond doubt that senior figures in the British establishment aided and cosseted this serial sex offender and in many cases did so with knowledge. It falls to you, chair and panel, to hold them to account, and we urge you to do so.