What comes after The Silence of the Liberals? 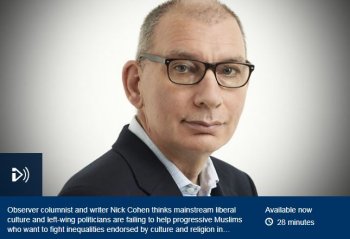 Nick Cohen has skewered the hypocrisy of leftists who apologise for Islamic intolerance, says Chris Sloggett. To defeat it we must assert the value of free speech as the most precious right which citizens share.

"I'm as interested in what isn't said as what is. In the arguments that don't happen, the scandals that don't break."

In The Silence of the Liberals, Nick Cohen speaks to progressive Muslims such as Amina Lone and Maajid Nawaz. He catches up with the human rights campaigners Peter Tatchell and Maryam Namazie. He visits the secretive offices of Tell Mama to speak to Fiyaz Mughal.

His thesis is that the liberal left leaves progressive Muslims, ex-Muslims and others to face fundamentalists unsupported. Demonstrating the reality of this is remarkably straightforward. All he needs to do is put a few phone calls in and note the refusal of those he is accusing to respond to the charge against them. When he approaches the Labour leadership, left-wing MPs and columnists, they almost all refuse to talk or fail to get back to him.

The interviewees he does speak to repeatedly make clear the lack of solidarity they receive from self-proclaimed liberals. Lone says Muslim women are often scared to speak up about the issues she raises. Namazie discusses the attempts to intimidate her at Goldsmiths University and the support so-called feminists and LGBT activists showed for those who tried to shut her up. Nawaz reflects on the Southern Poverty Law Centre placing him on a list of 'anti-Muslim extremists'.

We hear plenty of hints about why this is happening. Cohen is right that it partly results from the modern left's enthusiasm to embrace anything anti-western, no matter how revolting it is, and partly from the "racism of low expectations".

Perhaps it is also about votes. Maria Sobolewska, a professor from the University of Manchester, cites her research for the Electoral Commission which found how much influence paternalistic hierarchies can have on voting patterns. Winning the vote of large groups of people has meant treating them as a 'community' which can be won over by appeasing its 'leaders'.

The most sympathetic reading is that leftists simply do not want to join the pile-on against Muslims, who it sees as a generic group too often under unjustified fire from the right. There is some truth to this too, but it is not an acceptable reason to stay silent. Cohen points out that al-Qa'eda, Islamic State and others seize on stories of anti-Muslim bigotry – but that doesn't excuse a failure to speak up about it.

And Tatchell makes a pertinent contribution when he says liberals' silence leaves "a vacuum" which the far right "can step into and exploit to make unjustified and generalised attacks on all Muslims". The left's double standards, he says, deny it "moral credibility". Patronising Muslims as a homogenous bloc feeds the narrative of those who demonise them in the same way.

Pointing this out is valuable; although these stories and arguments may be familiar to those of us who follow them closely, they need a public airing. But defeating the liberal cowardice is far harder, not least because it is not a curious, isolated phenomenon.

A similar show could very easily address the obfuscations, mental gymnastics and shrugging that large swathes of the right – and even some of the self-styled heretic left – engage in to excuse intolerance which does not fit their narrative. (Cohen, who has spoken up about this, could credibly be the person to make it.)

Both of these phenomena have similar origins. We could use the freedom our ultra-individualistic age and rapidly changing world afford us to hear more ideas and stories and adjust our opinions accordingly. But instead we have settled into the comfortable world of gotcha discourse. We trawl the internet to find evidence which backs up our preconceptions and gives us the warm feeling that we've won the argument.

Lone highlights this when she says white feminists – who, we should add, are more likely to have their concerns heard than she is, even when they are less significant – see her campaigns as "not their problem". It's also particularly telling that, when Cohen finally manages to speak to someone more sympathetic to the left's position towards the end of his show, Ash Sarkar of pro-Corbyn media site Novara responds to his questions by talking about herself.

"I'm a communist, I'm a feminist and I like wearing booty shorts," she says, as if anyone cares. And her response on the presence of the hijab at school – she cites writing which "understands modesty in lots of different ways" – smacks of a relativistic attempt to seek out facts and perspectives which back up her own version of the truth.

The silent liberals are among those who have embraced the time-honoured logic of religious fundamentalists. I am entitled to my beliefs, they tell us, and no matter how ridiculous they are, I will not only defend my right to think and say them; I will do what I can to stop others from challenging them.

Pushing back requires us to point out the consequences of this mentality. We must highlight the dangers of unprincipled tribalism, and the risk that the loudest voices will exploit the acquiescence of the quietest.

More significantly we must reclaim the idea of the individual as a citizen with qualified rights and responsibilities. And citizens must be encouraged to embrace their most precious right – which is also the antidote to unwanted silence.

Too often free speech is treated either as an inconvenient irritant, which bigots and bullies use to assert their power, or a reason to give absurd arguments or individuals more credit than they are due. But Cohen's programme is a reminder that defending minority rights – including those of minorities within minorities – requires a strong commitment to speaking, listening and thinking for ourselves.

In schools, universities, the media and politics, we need to reward the open-minded and those willing to adapt their positions in the face of evidence. We need to encourage the view that our ideas are limited and our beliefs, no matter how deeply held, are open to criticism.

We need to teach children to question lazy generalisations, received wisdom and all-encompassing, simplistic worldviews. We need to demand higher standards of evidence from those who claim to speak on behalf of large groups of people. We must accept the need to address genuine grievances while also becoming less tolerant of those who wallow in victimhood.

Paradoxically, we need to become both more tolerant and less so. We need to act on the presumption that those who disagree with us are acting in good faith, and be wary of the dead end of excessive purity testing. But we also need to train ourselves to spot the ways the news agenda can be used to score points for a tribe. We need to marginalise the disingenuous voices whose only response to reasonable questions is "what about…?" or who cherry-pick arguments to smear, misrepresent or mislead.

The liberals' silence can only have an impact if we allow it to. But if we can orchestrate a concerted, consistent response then perhaps those things that aren't said, arguments that don't happen and scandals that don't break will be heard.

The Silence of the Liberals, by Nick Cohen, is available on BBC iPlayer Radio