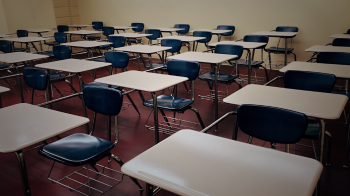 As a trial reveals the brainwashing of boys during evening classes at a mosque in Barking, Stephen Evans says the Government should defy faith groups which resist the regulation of out-of-school educational settings.

Schools rightly have safeguarding responsibilities towards the children and young people in their charge. Ofsted inspections ensure schools fulfil their responsibilities as set out in statutory guidance on keeping children safe in education.

But around 250,000 children are thought to be attending up to 5,000 religious supplementary schools in England and despite serious safeguarding concerns, no system for registering and inspecting such schools exists.

Back in 2016, in an attempt to reduce the risk of children and young people being exposed to harm, the government set out proposals to regulate 'out of school educational settings'. Under the plans, any settings providing 'intensive' tuition, training or instruction to children outside of school would be required to register and be subject to risk-based inspections.

Vociferous opposition from religious leaders and lobbying groups led to the government shelving the proposals. But a criminal case currently being heard at the Old Bailey illustrates why kowtowing to faith groups and failing to legislate to safeguard children was unwise.

In the ongoing trial of four alleged Muslim extremists accused of plotting terror attacks on London tourist attractions, details have emerged of boys as young as 11 being brainwashed and enticed into terrorism whilst attending evening classes at a mosque in Barking.

The court has heard how their teacher carried out role-playing sessions where some boys took the part of police officers and others were jihadists with a car bomb. The children were apparently trained with physical exercises while one of the accused, Umar Haque, shouted "Allahu akbar". In one exercise they used imaginary knives to sever a head.

The need for safeguarding, however, extends beyond protecting children from exposure to extremism. Safeguarding against physical and sexual abuse is necessary, too.

A BBC Radio 4 File on 4 investigation revealed that over 400 allegations of physical abuse (and 30 of sexual abuse) were made at Britain's madrassas in just three years. But these figures are likely to represent only the tip of the iceberg. Clerics are often highly revered in their communities and the close-knit and insular nature of many communities means there is almost certainly significant under-reporting in this area.

Furthermore, a charity and support group for former Ultra-Orthodox Jews has warned that corporal punishment is widely used in unregistered Orthodox schools. One former pupil, quoted in its response to the Government consultation, said he was hit almost on a daily basis and such violence was just part of the routine. The group said up to 5,500 pupils could be studying in such settings.

Concerns over safeguarding are not confined to minority religions. The Church of England is currently handling 3,300 safeguarding concerns or allegations of abuse ­– and in January this year the Archbishop of Canterbury admitted in a press release that his Church had "covered up, ignored or denied child sex abuse by its clergy" for the last 70 years.

It is therefore ironic that the Church of England was in part responsible for the proposals to regulate out of school education settings being shelved. In December Archbishop Welby boasted of "robust conversations" with "senior people in government" including the prime minister over plans to ask Sunday schools to submit to regulation. David Burrowes, co-founder of the Conservative Christian Fellowship and former MP for Enfield, even went as far as to threaten civil disobedience when the plans were announced: he insisted he would not let Ofsted inspectors into his "youth camp".

The most frustrating part of all this is that the proposals were drafted in such a way that institutions that teach children for a short period every week, such as Sunday schools or the Scouts, would not even be within the scope of the regulation. Nor would it apply to one-off residential activities, such as a week-long summer camp.

The Government was very clear that it was looking specifically at places where children receive intensive education outside schools, where children could be spending more than six to eight hours a week.

An orchestrated campaign against the proposals meant the Government received 18,000 responses to its consultation – many from Christians probably led astray by the scaremongering of Christian lobby groups that make a living out of peddling false Christian persecution narratives.

Amanda Spielman, the head of Ofsted, was therefore justified in calling the Church of England out on this earlier this month. She told the Church's Foundation for Education Leadership conference that "It is a matter of regret that the church has resisted changes".

"This is not about infringing religious freedom," she said. "No one is proposing a troop of inspectors turning up at Sunday schools. Instead, it is about ensuring that the small minority of settings that promote extremism are not able to evade scrutiny."

Ofsted clearly gets it. But there seems to be a real naivety amongst faith groups about what's going on here. There's no question that many out-of-school education settings enrich children's lives, empower them and enable them to flourish and grow. But in other cases, children are subject to brainwashing, abuse and harm. Children are being exposed to intolerance and hatred, sometimes in unsafe or squalid conditions. In some cases, these so-called schools are providing children's only education, with many providing over 20 hours of lessons a week ­– the threshold of where they must be registered or become illegal. In one London borough, Hackney, there are thought to be more illegal ultra-Orthodox Jewish schools than legal ones.

When David Cameron first announced plans to regulate, he warned that children in some madrassas were "having their heads filled with poison and their hearts filled with hate". The Muslim Council of Britain demanded that he substantiated these "serious allegations". The case currently being heard at the Old Bailey does just that. There is a clear case for regulation of supplementary schools. If the faith groups don't wish to notice, the Government should defy them and get on with it.