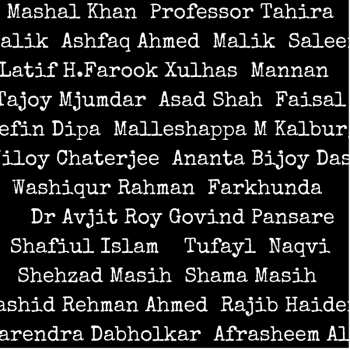 There has been an onslaught against secularists, atheists, ex-Muslims and countless religious minorities for 'blasphemy'. It's important to remember the individuals, and honour their lives and heroism.

In light of the recent press coverage around the trial of Ahok, a Christian Governor in Indonesia, for alleged blasphemy, and the investigation against Stephen Fry in Ireland, I thought it was important to remind people of the names and courage of those murdered for uttering, writing or drawing blasphemous content in the 21st century.

The list below contains the names and brief details of some of those people killed since 2000 on the basis that they had allegedly committed blasphemy.

It is almost impossible to list every person around the world who has been killed for this 'crime', even limiting the list to the 21st century.

The vast majority of the people listed below were killed for perceived insults against Islam.

Every time an atrocity happens such as the recent murders in Pakistan, there is outrage and condemnation, but we soon forget until the next deaths. I hope this list can provide a reminder for just some of these victims in one place.

The length alone of this (incomplete) list stands as testimony to the battle that still needs to be fought to defend free speech.

This blog is published anonymously.