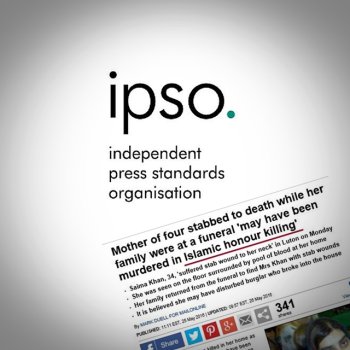 The press regulator has issued a troubling ruling that the Mail Online must state that Islam "does not support" 'honour killings'. Why is IPSO giving religious rulings to protect the reputation of Islam?

What business is it of the press regulator what interpretation of Islam is 'true'?

IPSO has unwisely embroiled itself in exactly such a debate, after it sided with a personal complaint from Miqdaad Versi, who is the assistant secretary general of the Muslim Council of Britain, who believes that 'honour killings' have "no basis in Islam."

Versi's complaint came after the Mail Online published an article with the headline "Mother of four stabbed to death while her family were at a funeral 'may have been murdered in Islamic honour killing'".

Versi claimed that 'honour killings' are "rooted in culture, not religion."

IPSO agreed with Versi that despite it being uncontentious that the woman in the case might have been murdered in an 'honour killing' (subsequent investigation in fact points to a burglary), the Mail Online's phrase "Islamic honour killing" wrongly linked Islam with 'honour killings'.

"The publication did not accept that the phrase 'Islamic honour killing' would have suggested to readers that 'honour killings' are approved of by Islam," IPSO notes disapprovingly.

The Mail Online offered to publish an amendment which read, "We are happy to make clear Islam as a religion does not support so-called 'honour killings'." But Versi didn't accept their offer and asked the Committee to issue a formal ruling enshrining his objection.

Though the Mail Online offered to print this amendment themselves, that the regulator has now required a newspaper to print the phrase "Islam as a religion does not support so-called 'honour killings'" is very troubling.

"Islam as a religion" is a meaningless phrase, which implies one homogenous bloc with one central authority and one 'true' interpretation where no such thing exists; an interpretation which IPSO has now required a news outlet to present as the religion of Islam.

It is true that this particularly hideous form of domestic abuse occurs in non-Islamic societies – and there is also no question that linking so called 'honour killings' to a particular faith can be damaging for communities.

But should IPSO really be issuing rulings categorically stating that Islam "does not support" 'honour killings'?

Islam has scripture, it has accumulated and transmits cultural attitudes about women, it has numerous interpretations which are disputed and literally fought over.

Despite Versi's personal interpretation of his faith, and his attempt to protect its reputation, religion and culture are not distinct. Religion accrues cultural practices, and cultures adapt religious values; like their attitude to women, for instance.

And in one practical sense 'Islam' in the real world is simply what Muslims do with it. If that is your definition of "Islam as a religion", then Versi's case falls down. Because literally tens, if not hundreds, of millions of Muslims around the world do think 'honour killings' can be justified.

Just 22% of Iraqis say that 'honour killings' are never justified. An overwhelming proportion of Muslims in Bangladesh, Pakistan, Afghanistan, Jordan, Egypt, Lebanon and the Palestinian territories think murdering women can be justified often or in some circumstances. This is deeply rooted in their understanding of their faith, which is a product of the culture in which the Koran was written. 'Honour killing' is the apotheosis of a vile misogyny that Whigs might have thought confined to the distant past, but it is not. It is very much a part of the 21st century.

Some of the highest rates of disapproval among societies with large Muslim populations for 'honour killings' come in central Asian countries. But even there, just less than 1-in-5 Muslims still think 'honour killings' can sometimes be permitted.

Where does culture end and religion begin? Do IPSO and the trite Mail Online 'correction' understand their religion better than these Muslims do?

Regardless of what the scripture says and regardless of theology or what school of thought is 'true', Islam, as practised, cannot be completely disentangled from 'honour killings'. No theological debate is necessary to establish this: Islamic 'honour killings' are a fact of our world and of this century.

It is impossible to disassociate this ruling from the ongoing (and renewed) push to sterilise our discourse about terrorism of all references to Islam, and purge the phrase 'Islamic State' from the vocabulary of the BBC, who have already partially capitulated with their aggravating insistence on inserting the prefix 'so-called', even in character-limited tweets.

All of this contributes to a chilling of discussion about Islam. Self-censorship is already endemic.

In their summary of the complaint, IPSO write that Versi "noted the difference" between "Islamic", relating to the faith, and "Muslim", relating to Muslim individuals.

I hardly think he would have preferred the headline "Muslim honour killing" instead of "Islamic".

If we are to debate about the language, we could start by recognising that there is no 'honour' in these brutal killings, as Nusrat Ghani MP argued at Theresa May's first Prime Minister's Questions on Wednesday.