Secularism protects us all. Let's embrace it. 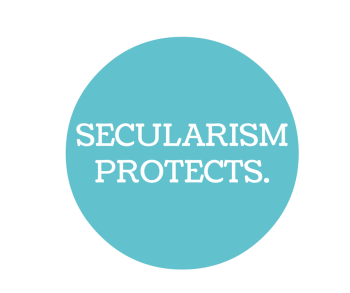 Britain today is one of the most religiously diverse countries in the world, with more non-believers than ever before. With society at risk of fragmenting along religious lines, secularism could be our salvation, argues Stephen Evans.

More than two thirds of people in the UK support equality for women and men, yet only 7% actually describe themselves as 'feminist'. This has led The Fawcett Society – the UK's leading gender equality and women's rights charity – to declare Britain a nation of 'hidden feminists'.

As a cheerleader for both feminism and secularism I'm struck by the similarities between these two much-maligned and misunderstood concepts. If Britain is nation of 'hidden feminists', then it's surely it's also a nation of 'hidden secularists'.

Take for example, the promotional blurb for a lecture on 'Why 'no religion' is the new religion' that took place recently at the British Academy, which claimed that "fewer than one in ten report being influenced by secularism".

It seems ludicrous to suggest that the vast majority of British people – regardless of their religious beliefs – have anything other than a secular, or at least 'secularish', outlook. We may not yet be a secular state, but poll after poll has shown that the British public – including religious believers – support secularist principles.

As the writer Myriam Francois-Cerrah rightly points out, "Britain is already deeply secular country. The exception is the Church of England and the privileges it continues to enjoy".

Let's look at the polling. A whopping 81% of us agree with the statement: "Religious practice is a private matter and should be separated from the political and economic life of my country". More of us oppose than support the idea of the UK having an official state religion. 58% of the adult population oppose faith schools. British citizens (including churchgoers) overwhelmingly reject the Church's position on abortion, assisted dying and same-sex marriage.

This all points towards strong support for secularist principles.

The British public is largely characterised by its indifference to religion. We're not a nation of religious zealots, nor are we particularly anti-religious – although there is significant hostility to religion when it tries to impose itself where it's not wanted or impede the rights of others. Nevertheless, recent data from the Pew Research Centre confirmed that people from the UK feel far less strongly about religion than most other people around the world.

Despite this indifference, religion is of course inescapable. Religion is ever-present in our news broadcasts. The spectre of terror we now live under is largely motivated by it. Our school system is to some extent organised around it. Our national ceremonies are dominated by it. Our national broadcaster is excessively deferential to it. Our Prime Minister even insists Britain is a "Christian country".

But it should be clear to Mr. Cameron that if we want people to buy into Britain's distinguishing characteristics and values, a civil conception of 'Britishness' would be more effective, more inclusive – and certainly more honest – than a vague religious one.

Growing irreligiosity and the emergence of other faiths in the UK demands that we urgently rethink the role of religion in public life. Do we accommodate Islam (with its political ambitions) and all the other minority religions and give them equal footing with Anglicanism – or do we start building a wall of separation between religion and state? I propose the latter.

Given the transformative social change which is taking place in Britain, secularism, with its commitment to everyone's religious liberty, stands to benefit us all, so why is it not more enthusiastically embraced?

Part of the reason perhaps is that secularism is widely misunderstood – often wilfully.

Many defenders of religious power and privilege dismiss secularism by falsely equating it with atheism and opposition to religion. The aim here is to present secularism as something that seeks to undermine religion, thus deterring religious believers from subscribing to perfectly reasonable secularist arguments.

Atheist secularists, it should be noted, have themselves been guilty of muddying these waters. Indeed, it was Charles Bradlaugh, who founded the National Secular Society 150 years ago, who famously clashed with George Holyoake over whether secularism necessitated atheism. Bradlaugh acknowledged that some secularists were not atheists, but it was his championing of atheism under the flag of secularism which in some ways still shapes the secular movement to this day.

Back in the mid-19th century, however, Bradlaugh's fight for the rights of atheists was a noble and necessary one. But the unwillingness of many of today's God-rejecting secularists to separate their personal beliefs from their expression of support for secularist principles can at times give secularism the air of 'politicised atheism'. This can be off-putting for potential allies.

But there's absolutely no reason why the secular movement shouldn't include a spectrum of religious beliefs, more that it does now. Indeed, secularism might be stronger for it.

Another tactic for traducing secularism is to equate it with a form of extremism. As Jacques Berlinerblau has pointed out, "commentators on the right and the left routinely equate it with Stalinism, Nazism and Socialism, among other dreaded isms." The weapon of using a pejorative adjective to attack secularism is also regularly deployed. Faith Warriors including the Pope, Government ministers and respected academics, such Professor Craig Calhoun, the Director of LSE, have all described secularism as 'intolerant, 'extreme', 'aggressive' or 'militant'.

Despite the claims of religionists determined to promulgate a victim narrative, the truth is that no sensible advocates of secularism in the UK are proposing anything remotely 'intolerant' or 'aggressive'. The National Secular Society's Secular Charter is certainly a radical challenge to the status quo, but it's hardly a form of 'extremism'.

Vague support for the established church endures because Britain is home to many 'cultural Christians'. Even Richard Dawkins describes himself as a 'secular Christian'. Christianity is, after all, a major influence among many that shape our current ways of life. At a time when many people are understandably concerned about the growing presence and influence of Islam in the UK, there is also sense that Christianity is seen as a bulwark again creeping Islamisation.

But surely a better response would be stand up for a principled and very British form secularism – a muscular yet inclusive form of secularism – a codification of 'live and let live – but within limits'.

As much as there is to admire about Laïcité, the French model of secularism is unlikely to be the best fit for Britain.

The 'soft secularism' which manifests itself as multi-faithism is also a path best resisted. In a country as religiously indifferent and diverse as ours it's nonsensical and dangerously divisive to organise public policy around religious identities.

The American concept of separation is perhaps closer to the mark. But we need to carve out our own British model of secularism – one which seeks minimal interference with the free exercise of religion yet protects secular spaces and ensures religious freedom is always balanced against an individual's right to live their lives free from religion. A model that treats a person's religion as a personal and private matter rather than the basis for public policy. One that robustly asserts the primacy of secular law and the principle of one law for all.

Secularists are often unfairly accused of wanting to "eradicate religion from public life". It's certainly true that we want to see religion's public role greatly diminished – an end to publicly funded faith schools is an example of this. But we should support an open society where people are free to express their beliefs, but at the same time be clear that there are limits to religious toleration. Pluralism may sound noble, but its practical effect is likely to have a corrosive effect on our cherished liberal values, restrict the freedom of women and children in minority communities, harm LGBT rights and and impede future social cohesion.

Secularism offers us something very precious. The chance for citizens to live in peace with other citizens whose creed is different from their own. Religious conflict and sectarian grievances have the potential to tear our society apart. Secularism can be our salvation. Let's embrace it.