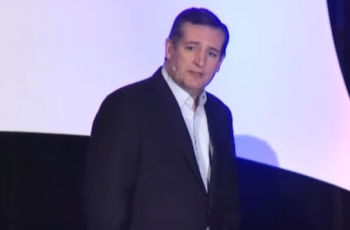 Young Americans might be turning away from Christianity, but the American religious right is more audacious than ever – and their rhetoric about 'religious freedom' barely conceals their theocratic aspirations, writes Benjamin Jones.

Ted Cruz, advocate for 'religious freedom', (meaning here the freedom for religious Republicans to do as they please at the taxpayers' expense), has said unequivocally that an atheist cannot serve as President of the United States.

When asked by the visibly deranged evangelical preacher Kevin Swanson, after some awkward banter between the two men, "how important is it for the President of the United States to fear God, and what does that mean to you?" Cruz gave an immensely troubling answer. The sentiment he expressed was unsurprising coming from him, but the phraseology he used was particularly chilling.

"Any president who doesn't begin every day on his knees isn't fit to be commander-in-chief of this nation," the Senator said.

Coming just a month after Ben Carson's ignorant assertion that no Muslim could serve as President, I wonder pessimistically if Ted Cruz's parallel comments about atheists will generate the same level of outrage.

American voters are still slightly more likely to consider a Muslim presidential candidate than an atheist one, and the rhetoric of a "Christian nation" seems to have fresh purchase in some parts of America, as it does for the British far-right, not for reasons of history or soft culture but to exclude the existential threat of the 21st century: radical Islam.

While we might feel safe to scoff about the dull-eyed parochialism of Sarah Palin and co from an ocean away, it's important to remember that these "Bible-believing" people really mean what they say, and I suspect they say only some of what they really mean – as Frederic Rich's novel 'Christian Nation' so powerfully demonstrated.

Carson's comments were actually comparatively mild, at least after he had 'clarified' them: …"anybody, [it] doesn't matter what their religious background, if they accept American values and principles and are willing to subjugate their religious beliefs to our constitution, I have no problem with them." What he eventually said then was that an Islamist couldn't be president.

I don't imagine he has any such concerns about a Dominionist Christian though.

But for Cruz, the US Constitution, a document he has sworn to "support and defend", doesn't seem to figure at all. Carson wants Muslims to disavow sharia law and "reject the tenets of Islam", though I don't have any reason to believe he has thought particularly deeply about any of this, whereas Cruz wants an entire group of people disbarred from office (as they still are in many states) either by law, or by public opinion at the very least.

'Religious freedom' in Cruz's case is clearly a very thin smokescreen, barely a light mist, for manifesting his theocratic sympathies at every level of the US government, from the county-level where Kim Davis still fights for the right not to do her job, up to the state and federal governments.

The apparently inexorable secularisation of America, as younger generations fall away from religion, and 'mainline' Protestants gain distance from their evangelical brethren on issues like homosexuality, could induce a fatal complacency. And while Islamism rightly draws most attention with a regular beat of atrocities, the political strength of the American religious-right shouldn't be underestimated.

Islam is to Islamism as Christianity is to Dominionism. There are gradualists and revolutionaries, those who work within the political system and those who would sweep it all away. There are 'peaceful' theocrats and violent ones. Islamism is orders of magnitude more dominant within Islam than Dominionist thinking is within American Christianity, and the violent varieties are vastly, exponentially more abundant within Islamism. But it is clear every day of this election cycle (when will it end) that the religious right is as muscular, assertive and as reactionary as ever: Perhaps it just seems louder because it has more to react against.

Though I don't get a vote on the matter, I would much rather a secular Muslim as US President than a Dominionist Christian, and would very much rather a liberal Christian than an Islamist. No candidate, religious or not, should be disbarred from office by law or popular opinion on account of their faith or lack of it; but any candidate who seeks to impose that faith from above should face a fierce fight.