So called Lord’s Prayer ‘Ban’: It’s Winterval all over again 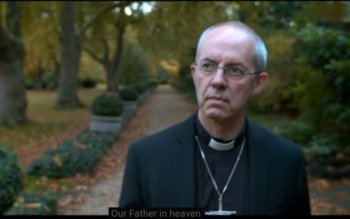 The controversy over cinemas rejecting religious advertising appears to be another attempt to reignite the Christian victimisation narrative, argues Stephen Evans

Praising the Church of England isn't something I often find myself doing, but you've got to take your hat off to them this time.

In a slick, albeit disingenuous, piece of marketing it has manufactured a bogus 'victimisation' narrative based around a supposed 'ban' on the Lord's Prayer – and in doing so has manipulated virtually every media outlet in the country into broadcasting its Lord's Prayer advert – all without paying a penny!

Naturally the BBC led the charge by timing its reporting of the so called 'ban' to coincide with the launch of the Church of England's new website encouraging people to start a relationship with God. Thought the BBC didn't do advertising? Think again.

But despite claims to the contrary, the Lord's Prayer hasn't been banned and nobody has deemed the Church's commercial to be "offensive". Dull perhaps, but not offensive.

The more prosaic truth is that the Digital Cinema Media (DCM) agency, which handles British film advertising for the major cinema chains, turned down the Church of England's advert because it falls foul of its policy of not accepting 'political or religious advertising' content for use in its cinemas.

The Church of England may be expressing faux outrage and "bafflement" in attempt to curry favour with the public, but DCM's policy is actually very clear.

"To be approved, an advertisement must not in the reasonable opinion of DCM constitute political or religious advertising"

DCM didn't ban the Lord's Prayer explicitly, nor did it specifically target the Church of England. The same policy would prevent Muslim groups from placing an advert featuring Islamic call to prayer or extolling the virtues of a caliphate; an atheist group from using cinemas to refute the existence of God; and the Church of Scientology from recruiting new Scientologists.

The reason for the policy is also clear. Religion, like politics, has the potential to be divisive and cinema chains don't want to run the risk of alienating their paying customers with unwanted religious or political messaging. In today's secular society people rarely go to church to be preached at, so it's reasonable to assume they don't go to the cinema to be preached at either.

One wonders whether the likes of Prime Minister David Cameron and Boris Johnson, who have both jumped on the bandwagon calling for DCM's decision to be reversed, would be equally as enthusiastic in insisting that an Islamic call to prayer should also be screened – or are they simply arguing for a privileged position for Anglican adverts? I suspect so.

Ultimately, this is a commercial decision – and one that a business should be free to make. The even-handedness of the policy should have prevented DCM from becoming embroiled in political or religious debate or being accused of bias, but unfortunately, the Church's dissembling saw that that wasn't so.

Now we have the undignified spectacle of the established Church threatening to sue in a bid to force its prayer commercial onto the big screens.

But given that DCM's policy treats all religion and beliefs equally, all this talk about using the Equality Act to force itself onto the same bill as Star Wars is surely nothing more than lightsaber-rattling from the Church.

Perhaps the most shameful aspect of their media campaign has been to invoke freedom of expression concerns in order to bully itself onto cinema screens. Freedom of speech doesn't mean you get to demand whatever platform you wish to broadcast yourself. As political commentator Ian Dunt said at Politics.Co.Uk:

Blasting the so called 'Lord's Prayer ban' on social media, the bishop of Guildford, Andrew Watson, proclaimed "It's Winterval all over again" – and he's right – but not in the way thinks he is.

The Winterval myth dates back to the late 1990s when Birmingham City was accused of 'banning Christmas' and trying to rebrand it 'Winterval'. As the bishop's comment demonstrates, the urban myth still endures to this day – despite the Daily Mail being forced into admitting it was a load of rubbish. But persecution has an allure for many Christians and some never seem happier as when they're claiming victimhood status.

That's why claims that the Lord's Prayer has been banned for causing "offence" have been so effective at rejuvenating the flock. With Anglicans and cultural Christians up and down the country voicing their condemnation of cinema chains, the Archbishop Cranmer blog rejoiced: "What a marvellously spiffing day this is for the Church of England, Justin Welby, Jesus and the Lord's Prayer".

With the help of the media the Church certainly appears to have been successful in carving out a modern myth to rival Winterval and craftily getting it message out to the masses.

Whether or not the masses will be receptive to the message is another matter altogether.