Bishops show why Church and State should split 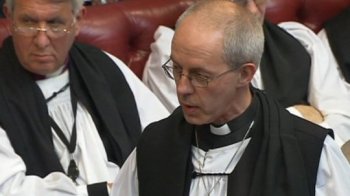 The Church of England is now widely regarded as irrelevant in the political and secular society that it seeks to minister and its bishops have no right to be part of our legislature, argues best-selling author and former Anglican priest GP Taylor.

I am not sure what the Bishops of the Church of England are getting up to these days. As their churches are emptying faster than a holey bucket, they again decide to dabble in politics.

Eighty-four of them signed a letter to David Cameron badgering him to take more refugees – something which is out of step with public opinion.

However, many Bishops regard public opinion as something that doesn't apply to them.

From my own experience as a priest, I know first-hand that some rule their bishoprics like tribal fiefdoms. Their grand pharisaic houses are not just offices but palatial apartments and a number of Bishops even have chauffeurs to take them to engagements.

In some Dioceses it is as if the world of All Gas and Gaiters is alive and well. Far from the church living in the 21st century, a Victorian attitude of ecclesiastical superiority pervades.

Nothing is clearer in this than the attempted rebuttal of criticism of the Bishops' letter written by Nick Baines in The Yorkshire Post last Thursday. With the Bishops accused of left wing bias, the Bishop of Leeds appears to throw his teddy out of the font in his clerical rant against the politicians and the media.

Again this is a mammoth lack of understanding of the culture that the Bishop is called to serve. What the CoE has to understand is that it is now seen as being totally irrelevant in the political and secular society that it seeks to minister to.

The actions of successive naughty vicars, faithless Bishops and loopy Archbishops only serve to make the Church a religious sideshow at best and a laughing stock at worse. The hard work of many parish priests who strive long hours to encourage a handful to persevere in faith is often undermined.

I would dread the pompous Bishop whom I served coming to my church. It would usually take weeks of hard work to mend the damage one of his 10-minute sermons could do. Pay more quota, work harder and have less clergy were always spouted from his pulpit like a Thatcherite mantra wrapped up in a homily about something he had heard on Radio Four about global warming.

Despite the Bishops' protestations that the letter to Cameron wasn't lecturing to anyone, it is a fine example of why the Church should stay out of politics. It must be understood that the role of the Church within the State is over. We live in a culture where Christian influence is dwindling and where secularism is ascending.

There is no need for the CofE to be linked to the establishment any more. This medieval arrangement has to stop. Bishops should be kicked out of the House of Lords as they have no right to be part of a legislature.

It is interesting that they plan their dabbling in politics in a very politically correct way. They seem to choose causes that make them seem warm and cuddly. Almost never do they publicly address those things on the hearts and minds of their parishioners.

I have yet to hear a Bishop criticise Muslim fundamentalism or call for action over the slaughter of thousands of Christians by Isis. When do they speak out about arranged marriages, female genital mutilation or the oppression and murder of gay people and women in some countries around the world? What are their views on the plight of their parishioners forced out of jobs and homes by low cost economic migrants? Why aren't they protesting about the cruelty of ritually slaughtered animals?

Speaking out on issues such as these would show the world that they had a spine. After all wasn't it Jesus who took on the Bankers in the Temple, beat them up and threw them out? Surely, it was Christ who was the founder of the direct action, Occupy movement?

Despite what some Bishops might think, it really is the job of a Bishop to get their own house in order before criticising the one next door. A Bishop is called to be a Shepherd of his flock to look after his people and clergy as a chief pastor. They are tasked with being spiritual mentors and protecting the church from heresy.

Sadly, so often I hear from fellow clergy who are in need and have little or no support from those appointed to care for them. One friend has repeatedly asked to see his Bishop and is constantly fobbed off.

It is clear to see that once a priest is elected to high office they see it as a divine right to put their noses into places where they are no longer seen as relevant.

The only way to stop the Church interfering in the matters of State is to cut the cord that binds them together.

A secular country does not need the interference of a spiritual club.

It is the role of the Church to make disciples of all people and bring them to faith, not to tell David Cameron what his foreign policy should be.

GP Taylor is a writer, broadcaster and former Anglican Priest. This article first appeared in the Yorkshire Post and is reproduced here with the kind permission of the author. The views expressed in our blogs are those of the author and do not necessarily represent those of the NSS.