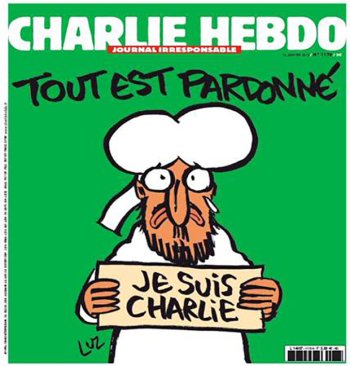 This is a translation of the editorial from the first Charlie Hebdo published since the Paris attacks. It is reproduced here in solidarity with Charlie Hebdo.

For a week now, Charlie, an atheist magazine, has accomplished more miracles than all the saints and prophets together. That of which we are the most proud is that you have in your hands the magazine that we have always produced, in the company of those who have always produced it.

What made us laugh the most, is that the bells of Notre Dame rang in our honor ... for a week now, Charlie has been moving far more than mountains across the world. For a week now, as Willem has shown us so magnificently in his drawing, Charlie has many new friends. Some anonymous, and some global celebrities. Some humble and some affluent. Some miscreants and some religious leaders. Some sincere and some akin to jesuits. Some who will be with us for the rest of our lives, and some who are just passing by.

We take them all on board today, we have neither the time nor the heart to separate them out. But that doesn't mean that we are fooled. We wholeheartedly thank those in their millions whether simple citizens or embodying institutions who are truly at our sides, who deeply and sincerely "are Charlie." They will know who they are. Pissing off the others who don't give a fuck anyway.

There is however a question which still gnaws away at us: Are we finally going to see the foul expression "secular fundamentalist" disappear from political and intellectual lexicon?

Are we finally going to stop devising learned semantic expressions describing equally assassins and their victims?

In recent years, we have felt rather lonely, trying to push back with our pencils straightforward bullshit and pseudo-intellectual subtleties that they were throwing at our faces and that of our friends who were strongly defending secularism: Islamophobes, Christianophobes, troublemakers, people assuming no responsibility, those who throw oil on the fire, racists, you-asked-for-it ... yes we condemn terrorism, but. Yes it is not good to threaten cartoonists with death, but. Yes, setting fire to a magazine's headquarters is wrong, but.

We've heard it all, as have our friends. We've often tried to laugh it off, because that's what we're best at.

But now, really, we'd like to laugh at something else. Because it's already starting again.

Who were the victims?

We were already hearing, here and there, these delicate people put on airs and graces on witnessing last Sunday's gathering, dribbling endless pettiness, seeking to justify, openly or in whispers, terrorism and religious fascism, expressing indignation at the fact that we can say police = SS, among other things.

No, in this massacre, no one death is less unjust than another. Franck, who died in Charlie's premises, and all his [police] colleagues killed during this barbaric week, died to defend ideas which may not even have been their own.

Nevertheless we are going to try to be optimistic, even though it is out of season.

We will hope that as of this January 7, 2015, strongly defending secularism will be second nature for everyone.

That we will finally stop posturing for electoral reasons or through cowardice, legitimizing or even tolerating community separatism and cultural relativism, which lead to but one thing: Religious totalitarianism.

Yes, the Israeli-Palestinian conflict is a fact, yes, international geopolitics is a succession of manoeuvres and underhand blows, yes, the social situation of "populations of Islamic origin" in France, as people say, is deeply unjust, yes, we must fight unremittingly against racism and all types of discrimination.

Pushing for universal rights, it alone, allows for equality, liberty, brotherhood and sisterhood. It alone allows for total freedom of conscience which all religions, as soon as they move from the arena of the strictly intimate into the political arena, deny, more or less openly according to their marketing position. Oddly enough, it alone allows believers and others to live in peace. All those who claim to defend Muslims, while accepting the totalitarian religious rhetoric, are in fact defending their executioners. The first victims of Islamic fascism are the Muslims.

The millions of anonymous people, all the institutions, all the heads of state and government, all the political, intellectual and media celebrities, all the religious dignitaries who this week proclaimed "Je Suis Charlie" should know that also means "I am secularism." We are convinced that as far as most of our supporters are concerned, that goes without saying. The others can do what they like with it.

Last but not least. We would like to send a message to Pope Francis, who this week, he as well, "is Charlie": We will only accept that the bells of Notre Dame are ringing in our honour when it is the Femen who are ringing them.