A strange case of blasphemy 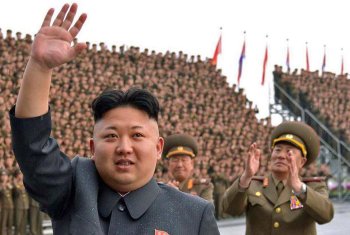 The Sony crisis is almost identical to the Satanic Verses controversy, or the Mohammed cartoon riots. Benjamin Jones argues that Sony's capitulation to North Korea has all the hallmarks of religious blasphemy cases, and that the state religion of North Korea is functionally identical to theocracy.

Once again the West has surrendered to someone else's idea of blasphemy. Where will this end? In the familiar stilted English of North Korean proclamations, Sony was warned: "Stop immediately showing the movie of terrorism which can break the regional peace and cause the War." And so they did.

After an unprecedented cyber attack, what some have called the "first cyberwar", the West has settled back into a familiar pattern of retreat and surrender. 'Safety' is trumpeted, as though submission were the same thing as safety.

This story is familiar. If Sony is substituted for Jyllands-Posten, who published cartoons of the Muslim Prophet Mohammed in 2005, and North Korea's cyberwar is substituted for the violent reaction in the Islamic world, the cases are almost identical.

The threat of violence from deranged fanatics (Islamist or North Korean) is enough to intimidate and silence, and there are, it seems, many people who think that safety is best assured by just trying very hard not to upset anyone. It doesn't seem to matter that the aggrieved party is making ludicrously unreasonable demands about their special right and privilege to not have their God (be it Allah or Kim Jong-un) satirised (or even depicted).

The first 'cyberwar' has ended in a resounding defeat for free speech. Once again, violence (or the threat of violence) has been allowed to trump the normal operation of a secular society. 'Safety' has been placed above integrity, as though giving into North Korea's demands will make America and its allies safer in the future. Gary Kasparov has rubbished this madness best: "If threats from poor Stalinist prison camp of North Korea can do this, imagine Russia & China, with huge resources. They are watching."

The imposition of someone else's religious sensibilities upon newspaper readers, cinema-goers and fiction readers is intolerable in a secular society and this is a question of blasphemy.

North Korea is an intensely religious country. The "Great Leader" doctrine of Juche, the state-mandated religious ideology, provides for a Messiah, the Kim dynasty has even codified Ten Commandments in the "Ten Principles." Mass devotion (or at least the performance of belief) is integral to life for those trapped within the hermit kingdom, and now we have terrorised ourselves into compliance with their oppressor, limiting the bounds of satire to placate the state-terrorists who keep a whole country in petrification. The absurd figure of Kim Jong-un is now another, in a long list, of religious icons which have some special protection in our societies; privileges derived now from fear and coercion, which were once derived from repressive blasphemy laws. We do this to ourselves- and compound the problem in many cases relating to Islam with our modern sensibilities about not wanting to upset or offend people.

Secular societies must stop surrendering ideological ground to people who think their deity (Abrahamic or otherwise) is so all-powerful that they need protection from people making jokes at their expense.

This film is a test-case for a fundamental principle in free, secular societies, and we have failed. In this case, the price has been a film left unreleased; what will the price be when China, Russia or IS decide to mount cyber-attacks of their own? We have set a terrible precedent, and sold our secular freedoms under the mildest type of discomfort.

Sony is a business and made a business decision, but we cannot delude ourselves that it will end there.

Religious iconography is fair game in free societies, Sony (and the cinemas who refused to screen the film) will not be the last to capitulate against the cries of blasphemy. From Islamists to North Korean hackers, free speech in the West is being squeezed. Even the mildest encroachment needs to be refused. I for one just hope a 'Kim and Mo' cartoon is forthcoming.