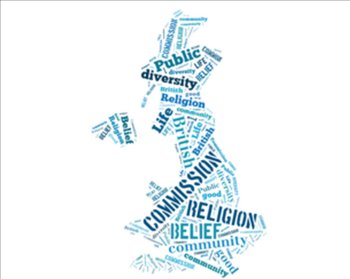 A commission has set itself up to "take the temperature of Britain's relationship with religion". But with so many vested interests on board, Terry Sanderson questions how objective its findings will be.

A commission has set itself up with the task of "taking the temperature of Britain's relationship with religion." It will submit the results of its findings to the Government returned in the 2015 elections.

The Commission on Religion and Belief in British Public Life was launched at the House of Lords last week and says that it wants to listen to people's opinions about the role of religion in society.

It has been organised by Cambridge University's Woolf institute, whose patrons include HRH Prince Hassan of Jordan and is named after Lord Harry Woolf, former Lord Chief Justice, who is on record for his views that Christians have become oppressed by the judiciary. The Commission is headed by Baroness (Elizabeth) Butler-Sloss.

While the latest British Social Attitudes survey shows the majority in the UK to be non-religious, the vast majority of those on the 19-strong Commission are connected with religious organisations or known to be religious - with one token humanist.

Other members include the Archbishop of Canterbury's secretary for interreligious affairs, Dr Toby Howarth, the former Archbishop of Canterbury, Lord Williams, and Lord Harries of Pentregarth, Bishop Dr Joe Aldred, of Churches Together in England, Professor Gwen Griffith-Dickson, vice-principal of Heythrop College – and representatives from Islam, Hinduism, Judaism, and the Sikh community.

More than 50 academics, faith leaders, and politicians were at the launch, including the Apostolic Nuncio, Archbishop Antonio Mennini.

The Commission's objectives are worthy enough, to:

The team says its focus will be on the impact of religion on national identity, how children are taught about religion, and its connections with the law, social action, dialogue and the media. It will also examine the role and viability of an established Church in the twenty-first century.

Dr Ed Kessler, the executive director of the Woolf Institute said at the launch that the commission would consult on six different themes - the law, the media, social action, education, dialogue, and social change

"Today's UK . . . presents a more complex and diverse context than has been hitherto in existence," he said. "We have met for a year now, discussing these issues with various experts. We hope members of the public can contribute to some of these questions," Dr Kessler said.

After a tour of the UK, which aims to include "hard-to-reach communities", and which includes the cities of Glasgow, Belfast, and Leeds, the Commission will produce a report with recommendations for the next Government in 2015.

Launching the Commission, Lord Harries said "Religion is now a major player on the public stage in a way that would have taken people in the 1950s by surprise."

And of course he's right – religion certainly is a major player in world affairs, but not always in a positive way, as is all too evident from what is happening in the Middle East, for example.

A surprising member of the Commission is Sir Iqbal Sacranie as a patron, given his reported comments at the height of the Salman Rushdie affair: "Death, perhaps, is a bit too easy for him[;] his mind must be tormented for the rest of his life unless he asks for forgiveness to Almighty Allah."

Lady Butler-Sloss has stressed that the Commission is entirely independent: "The conclusions will be entirely our own and largely dependent on our consultations", she said.

But with a membership made up of so many with vested interests it is difficult to see how objective this Commission can be. I sincerely hope that the Commission's examination of "emerging trends and identities" will include an even-handed assessment of the implications of the majority of the population being non-religious. Given its composition, it is going to have its work cut out.

The Commission will submit its report to whatever new Government is elected in 2015. Submissions are invited here: www.corab.org.uk