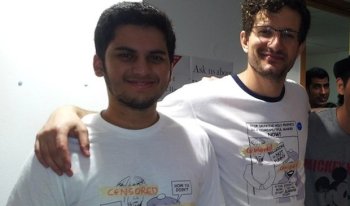 "The right of each person to dress … as they choose has been at the core of the cohesion of our multicultural society"
– Jay Stoll, General Secretary, LSE Students' Union, September 18, 2013

The trouble with advertising yourself as an institution for people who enjoy being "challenged intellectually, socially and personally" is that some of us will actually believe it, and expect you to live up to that promise by being a haven for free inquiry and free expression.

This was the delusion under which Christian Moos and I set up our Atheists' Stall at the LSE Freshers' Fair on Thursday morning, wearing t-shirts featuring an award-winning comic strip known for its crisp satires of the monotheisms. In this way, we hoped to greet our new members with a popular and light-hearted lampoon. Then political correctness caught up.

The London School of Economics Student Union (LSESU) will tell you that its scandalous crackdown was prompted by concerns that our t-shirts jeopardised "good campus relations" and the "spirit of the Freshers' Fair". Perhaps some of this bonhomie was lost in translation, because where a polite request would have sufficed, we were subjected to an ambush.

At noon, the Community and Welfare Officer Anneessa Mahmood barged in and began ripping our publicity material off the wall, while her companions, the Deputy Chief Executive Jarlath O'Hara and Anti-Racism Officer Rayhan Uddin, demanded we take off our t-shirts on pain of being hauled bodily from the premises. Their Kafkaesque refrain was that the t-shirts were "offensive" to some students and that an explanation would be provided at some point after our eviction.

We stood our ground, protesting our innocence, and so Paul Thornbury, the Head of LSE Security, was summoned to inform us that we were not behaving in an "orderly and responsible manner", and that our wearing the t-shirts could be considered "harassment", as it could create an "offensive environment", which is an absurd claim to make of wholly innocuous t-shirts whose writing, in any case, is obscured unless you stop, stare and squint at the right angle while the wearer is still. And that's if you visit the Atheist Society Stall, never the most popular hangout for deeply religious people anyway.

Mr Thornbury was unmoved by our arguments, and had us surrounded by security guards, with the warning that should we disobey his command, we would be dragged out. Browbeaten and awaiting a clearer interpretation of the rules, we said we would temporarily put on our jackets, and so in a surreal sequence, the Head of LSE Security hovered about us like a short-sighted tailor, assessing whether we had concealed enough, pausing to protest at one point that the word "prophet" was visible from a certain angle. He then deputed two guards to stand in the aisle, facing our stall, to stop us attempting to take our jackets off and to shadow us wherever we went till closing time.

We wrote overnight to LSE Legal and Compliance, seeking an explanation and a legal justification for our treatment. No adequate clarification was forthcoming, and so the next morning, we arrived at the Fair having covered the front of our t-shirts with tape bearing the word "censored", so that you'd now have to visit our stall, stop, stare, squint for several seconds while we were still and then ask us what was beneath the tape, and we'd have to explain it, before you could make out the innocuous depiction. But we reckoned without the bloody-mindedness of the SU.

Shortly after midday, Deputy Chief Executive O'Hara descended on us, demanding we take the t-shirts off as per his instructions of the previous day. We explained to him that we had redacted them this time, and offered to use our home-made tape to cover any other areas he wished to see covered. Our concessions came to nought. He refused to hear us out, and left, warning us that he was summoning LSE Security to remove us from the premises.

Surprisingly, several hours passed before their next move (a curiously tardy response for an administration purporting to counter harassment), in which Mr Thornbury reappeared near closing time, armed with a letter from the School Secretary Susan Scholefield, which claimed that since some students found our t-shirts "offensive", we were in possible breach of the LSE Harassment Policy and Disciplinary Procedure. It claimed that our actions were "damaging the School's reputation" and concluded by asking us to "refrain from wearing the t-shirts in question and cover any other potentially offensive imagery" and warning us that the School "reserves the right to consider taking further action if warranted". On our way out at closing time, we saw Mr Thornbury, General Secretary Stoll and Deputy Chief Executive O'Hara skulking in the corridor, accompanied by a posse of security guards. They shadowed us to the exit.

The great polemicist Christopher Hitchens used to say that whenever someone complained to him that something was "offensive", he would retort "I'm still waiting to hear what your point is". This neatly skewers the fatuousness of such a complaint.

Our motives have been relentlessly impugned over the past two days, with Mr Thornbury and Mr Stoll rashly accusing us of wishing to cause offence. We categorically deny this, and struggle to fathom how such innocuous t-shirts, which contain neither threats, nor racist taunts, nor foul language, could support such an accusation. Forcing us to cover up a harmless likeness of the prophets amounts to demanding we obey religious law to avoid upsetting the religious. What is the freedom of expression if not the freedom of the heretic who thinks differently?

Mr Stoll later took to the LSESU's blog to defend the LSE as a place that is "committed to promoting freedom of expression" because its public lectures feature a "wide range of speakers". I don't see why this should imply broad-mindedness – hosting crowd-pulling contrarians is the price of maintaining your reputation as a landmark on the global lecture circuit. A truer test of a university's commitment to freedom of expression is how it treats two lowly students summoning up the courage to stand by their principles in a dignified and understated manner.

And Mr Stoll and the School have some nerve to claim that we were threatened because "it was feared" that we would "disrupt the event", when in fact the event was progressing perfectly smoothly until it was disrupted by the ham-fisted intervention of the student union. We strove to remain calm, pacific and reasonable, standing our ground even as we were subjected to a barrage of increasingly egregious demands and jostled by security guards. If harassment is, as the LSE Harassment Policy defines it, anything that "violates an individual's dignity and/or creates an intimidating, hostile, degrading, humiliating or offensive environment", then we were harassed.

Our critics contend that we were being needlessly inflammatory. Quite apart from the cliché that the people who rule over us are the people we cannot criticise, do these people genuinely think it is a waste of time and effort defending freedom of expression from religious reactionaries? Could they suggest a better cause? Perhaps they will be swayed by the fact that the gifted cartoonist whose t-shirts we wore publishes his work under a pseudonym because of threats to his life.

These sickly invocations for decorum are of a piece with the risible claim made by Mr Stoll and the School that their clampdown was prompted by the fear that we were sabotaging the prospects of a sanitised Fair "designed to welcome all new students", and that our t-shirts and posters were welcome once this delicate initial period had passed. We have good reason to doubt this.

For one thing, Mr Thornbury contradicted it with his warning that we would be evicted if we were ever seen wearing these t-shirts on campus again. And just last year, our efforts to better signpost ourselves for Muslim apostates on campus by adding "ex-Muslim" to our Society's name (on the lines of ex-Mormon groups in the U.S., and for the same reasons) were gratuitously frustrated. First, the Union ordered us to prove "clear cooperation with the Islamic Society" before they would consider our application; then, they backed out with the wet excuse that the change could jeopardise the "safety" of ex-Muslims in our group, which came as news to the ex-Muslim organisations on whose insistence we'd sought the change.

Amidst the acrimony, it would be remiss of me not to mention the countless open-minded Christians and Muslims, among them women in hijabs, who visited our stall out of curiosity, engaged us in good-natured banter about our work and accepted our invitation to the first of the many public debates we conduct with religious societies through the year. On their behalf, I accuse the LSE of slandering its religious population by allowing its most peevish elements to speak for the whole community and infantilising religious students by creating the impression that they are unable to handle gentle satire.

But it isn't all gloom.

In one of those beautiful little ironies of life that makes even a staunch atheist like me wonder if there might, after all, be a god, the LSE student newspaper reported in its edition of October 3 that LSESU had been rated the worst Students' Union in London, and that the LSE was ranked the fifth-worst university for crime in the UK. Would that Mr Stoll and Mr Thornbury were always so ubiquitous.

Abhishek Phadnis is a Master's candidate at the London School of Economics & Political Science and President of the LSESU Atheist, Secularist and Humanist Society. The views expressed are those of the author and do not necessarily represent the views of the NSS.