Scouts: Reflections on a victory from a former Scout Leader 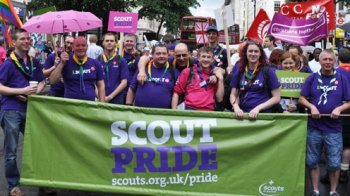 So, it took about 25 years but it's finally happened.

My campaign to get the Scout Association to change its promise began in the late 1980's when a brilliant assistant leader I had was hounded out of the movement for daring to suggest that the movement introduce just what they have introduced.

Along the way, I have met many heartbroken adults who've been desperate to give back to Scouting what they got from it as children, but were prevented from doing so by the movement's strict religious requirements. But I didn't just campaign for them.

During my 30 year career as a Scout Leader, I campaigned for girls to be admitted. 'Never!' they said. The first ever girl who joined my Scout Troop now runs it and also trains other leaders.

I campaigned for gays and lesbians to be given membership. 'Never!' they said. Last summer I stood in Regent Street watching The Fellowship of Lesbians and Gays in Scouting marching through London on the Gay Pride March wearing the scarf I designed for them!

But when I campaigned for a simple secular promise OPTION that would allow non-believers to join whilst (rightly) leaving the religious one intact, they said Never! far more loudly than ever before. And no amount of campaigning by me, the NSS and BHA or the many hundreds of leaders who joined my cause, could even get them to consider it.

It took a moment of brave realisation by one official that the world had changed and that as a movement, Scouting by definition, had to change with it to bring about the simple change we sought.

Scouting now really is open to all – something that the writings of Baden Powell show he would have wanted. Last summer, I retired from all work involving children after 35 years, so I no longer wish to play the game of Scouting. However, as the old saying goes, 'once a Scout, always a Scout'. And I am once again proud to be a Scout.

Shaun Joynson is a former Scout Leader and an NSS member. The views expressed are those of the author and do not necessarily represent the views of the NSS.