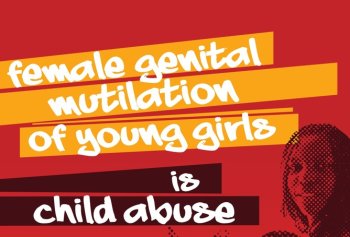 Back in 1999, a group of MPs criticised the author Germaine Greer. They were astonished by her claim in a book that criminalising female genital mutilation (FGM) amounted to "an attack on cultural identity". The MPs described Greer's view as "simplistic and offensive" but the fact that she could write in those terms less than 15 years ago, when FGM was already illegal in this country, is sobering.

It's also an indication of how the debate has moved on, to the point where FGM is widely regarded as a form of child abuse. But it remains a hidden practice, carried out in secrecy, and not a single person has been convicted of mutilating a girl's or woman's genitals in this country.

Unsurprisingly, this fact has caused trenchant criticism of the police and the prosecuting authorities; the UK is often contrasted unfavourably with France, where more than 100 people have been convicted. Some of the French convictions arose from two incidents where something went wrong and the families reported the practitioner to the police, but one recent case came to light when a child was treated for appendicitis and the hospital reported it to a prosecutor.

The reporting system in this country is nothing like as robust, as The Independent on Sunday revealed in January; a survey of 500 hospitals and local education authorities found that less than 50 kept records of women and girls who had undergone FGM or were believed to be at risk.

This lack of intelligence, say the police, goes to the heart of why there haven't been prosecutions in this country. It's also the reason why they've changed tack in London, appealing for information from the public about people who are doing the cutting.

"We've been waiting for victims to come forward," Detective Chief Inspector Iqbal Singh told me last week. "It hasn't worked, so now we're targeting cutters. FGM is child abuse and we're trying to get intelligence flowing into the police about cutters in the community."

In retrospect, the 1985 law outlawing what was euphemistically described as "female circumcision" created unrealistic expectations about children giving evidence against their parents. So the Metropolitan Police has adopted a new strategy, which it describes as "intelligence, prevention and enforcement". A key element is the NSPCC helpline set up last month for the public to report their suspicions about FGM, which was a police initiative.

"People don't want to talk to the police about this," Detective Chief Superintendent Keith Niven says frankly. "I understand that. Now there's another route."

Niven is head of Scotland Yard's Sexual Offences, Exploitation and Child Abuse Command. He's also in charge of Operation Yewtree, the inquiry into the late Jimmy Savile, and he's worked closely with the NSPCC during that investigation.

"You don't have to carry the weight of this information alone," is his message to families where FGM is carried out. "Please just tell us who's doing it. You can remain anonymous if you like. We need a starting point." His officers admit they don't even have as much information as they'd like on who is doing the cutting: "It could be a matriarchal figure or it could be a GP who's doing it as a sideline," says Singh.

If this sounds a rather candid admission of helplessness, the frustration of senior officers is palpable. Thousands of girls are believed to be at risk — the figures are estimates and vary widely — but what is known is that more than 1,700 victims of FGM have been referred to specialist health clinics in the UK in the past two years.

In London, a women's organisation, Imkaan, has carried out research suggesting that 7,000 women affected by FGM give birth in the city each year, which is a clear risk indicator for their daughters. So here's a startling figure: the police have received only 167 referrals about FGM since 2009. "Other state organisations are dealing with victims on a daily basis," Singh points out. "Why isn't that information coming in to the police?"

In a heartening sign, the NSPCC helpline received 39 calls in the first two weeks of operation. During the first week, five of the calls related to the area covered by the Met. So far they've been what Singh calls "snippets" — a teacher reporting anxiety about a girl being taken to an FGM-practising country for six weeks, for example. He sounds a word of caution: "It may be to do with FGM but it doesn't always turn out to be an allegation of crime. We need evidence — are these grounds to examine the children?"

Girls are routinely checked for FGM in France, but there's little appetite for compulsory examination in this country. The practice is unlike other forms of child abuse in one crucial respect. Most intelligence that a child is being abused comes to the police via relatives, teachers and organisations such as youth clubs — for example a teacher seeing bruises during a PE lesson.

"In a lot of child protection cases there's a build-up," says Niven. "But it doesn't happen with this type of crime. There's no contact with social services and no previous offences. The child could live in a family where there's no other detriment to them. That's one of the reasons we aren't getting those referrals."

The subject is particularly urgent as the summer holidays begin and girls are at risk of being sent abroad to be cut. There is also a worrying degree of ignorance: in March, the NSPCC published a survey of 1,000 teachers which showed that one in six didn't know that FGM is illegal in the UK. Almost the same proportion didn't regard FGM as child abuse, while four out of five said they'd had no training on how to spot warning signs.

It sometimes feels as if that elusive first prosecution is as far away as ever. While the kind of attitude expressed by Germaine Greer in 1999 seems anachronistic, the authorities remain caught between opposing accusations: not doing enough to stop FGM because of "political correctness" on the one hand, and encouraging "racist curtain-twitching" on the other. (That's the accusation recently levelled at the NSPCC by a mischief-making website, by the way.)

The police in London say they want to eradicate FGM within 10 years, which is ambitious. But it's a serious form of violence against women, and they need all the help the public can give them.

www.politicalblonde.com ; twitter.com/@polblonde. This article originally appeared in the Independent and is reproduced with the author's permission. The views expressed are those of the author and do not necessarily represent the views of the NSS.

Joan Smith is journalist, activist and and honorary associate of the National Secular Society. Follow her on Twitter @polblonde. The views expressed in our blogs are those of the author and may not necessarily represent the views of the NSS.