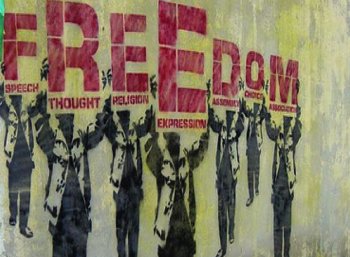 Charles C. Haynes argues that the First Amendment of the United States Constitution must be vigorously defended from religious attacks.

Government in America must be neutral among religions and neutral between religion and non-religion — at least that's how the U.S. Supreme Court interprets the establishment clause of the First Amendment.

But escalating conflicts involving government treatment of the non-religious — atheists and humanists — reveal that far too many government officials are confused and conflicted about the meaning of "neutrality."

In recent months alone, an atheist monument stirred controversy in Florida, an atheist applicant for citizenship was instructed to join a church, and a congressional committee nixed atheist chaplains.

Let's start with the first-ever atheist monument, a 1,500-pound bench erected alongside a Ten Commandments monument in front of the Bradford County Courthouse in Starke, Florida.

After a local Christian group installed the Ten Commandments monument last year, American Atheists sued to have it removed.

When county officials refused, the atheist group decided to put up a counter-monument featuring quotations from various American founders about church-state separation and passages from the Bible describing punishments for violating the Ten Commandments.

Bradford County set the stage for this confrontation in 2011 when it designated the space a "free speech forum" in order to allow a local Christian group to put up a Ten Commandments display.

But county officials soon realized that once the courthouse courtyard is open to one, it must be open to all.

American Atheists, of course, would rather have no monuments on government property. But if you can't beat them, join them.

The tactic of putting an atheist message next to a religious message puts governments on notice that any attempt to promote religion on public property will be answered by demands for equal treatment from the non-religious.

The push-back from atheists in places like Bradford County is triggered by the fact that equal treatment for the non-religious is difficult to come by in a society where religion is often privileged.

Consider the cruel choice faced by Margaret Doughty, a British-born atheist who has lived in the U.S. for 30 years. The U.S. Citizenship and Immigration Services informed Doughty earlier this month that unless she joined a church her application for naturalized citizenship would be denied.

Doughty ran into this roadblock because she can't in good conscience swear that she is willing "to take up arms to defend the United States."

The government, it turns out, routinely grants conscientious objectors exemption from this oath — but only if they belong to a religion that opposes the bearing of arms.

This policy puts atheists and humanists seeking citizenship — but who have moral objections to war — in the unfair and unjust position of either joining a church or being denied American citizenship.

What makes this particularly galling is that the Supreme Court made clear years ago that draftees with moral and philosophical beliefs that impose a duty not to participate in war must be granted conscientious objector status on the same basis as those with traditional religious convictions (Welsh v. United States, 1970).

After letters of protest from the American Humanist Association and other groups representing atheists and humanists, the immigration service backed down — and Margaret Doughty is now an American citizen.

Immigration officials may finally understand the meaning of equal treatment for the non-religious. But many members of Congress have yet to learn this First Amendment lesson.

Recently, the House Armed Services Committee voted down an amendment to the defence bill that would have authorized atheist and humanist chaplains in the military.

Protestant, Catholic, Jewish, Muslim, and Buddhist chaplains serve in all branches of the military. But a majority of the members of the Armed Services Committee apparently believe that the non-religious don't have the same needs as the religious for counselling, support and community.

These and many other clashes involving atheists fighting for equal treatment could be avoided if government officials understood that religious liberty isn't just for the religious.

As guaranteed by the First Amendment, religious liberty is built on a simple, but profound, principle: