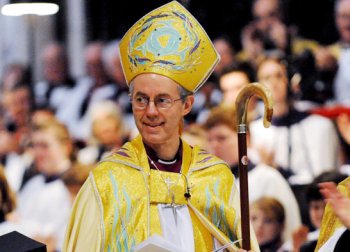 The Church of England takes it for granted that it is the taxpayers' job to fund its evangelising. We contribute hundreds of millions to support "faith schools" which they use to impart their religion to children who are obliged by law to attend. ("School is church" as the previous Archbishop of Canterbury, Rowan Williams was wont to say).

Now the new Archbishop of Canterbury joins the orchestrated call for more religion on the BBC. Justin Welby tells readers of the Radio Times (where he is given a full page to make his point – something the magazine would never dream of giving his opponents) that dropping religion from TV schedules would have "dangerous" consequences. He says that abandoning religious programming would "cultivate ignorance".

After taking the opportunity to remind us that Jesus died for all our sins, the archbishop said: "Most people have some kind of religious belief, and certainly some kind of cultural religious inheritance. In a multicultural society like ours, religious literacy is something whose importance only continues to grow."

Plenty to take issue with there, but we'll let that pass as he continues: "For adults over a certain age who received little in the way of religious education at school — especially of an inter-faith variety — religious broadcasting is likely to be their best guide to the different faiths, not just of the people they see on the news but of the people they meet at the school gates, or queue next to at the post office."

He also said that there were some who believe faith and religious life should be kept behind closed doors. "But if broadcasters were also to adopt the view that religion is something separate and private, rather than stitched into our public life, then we could set off down a dangerous road. We would be cultivating ignorance where what we need is insight, and prejudice where we most badly need open minds... Knowing, understanding and celebrating the faiths of our neighbours will help us all to flourish."

But religious education often morphs into religious proselytising (as the increasing presence in our state schools of evangelising groups such as the Gideons illustrates) and that is the antithesis of an "open mind". Evangelisers seek to close minds.

Conversations casually struck up in Post Office queues or at the school gates are unlikely to be about religion. If they are, they are likely to be tense and offer little opportunity to bridge cultural barriers.

The archbishop went on to say that it was "essential that we support broadcasting that teaches us about those around us".

He cites "the marvellous portrait of Manchester's Jewish community in ITV's Strictly Kosher is one example of how the media can help us to see the people around us as they really are."

The picture accompanying the Radio Times article shows an orthodox Jewish man in a state of what appears to be religious ecstasy. Not the sort of person who would want to know anything about your religion, because your religion is not his religion and his religion is the only religion.

"Likewise, Channel 4's Islam: the Untold Story gave viewers an opportunity to appreciate the rich and fascinating history of the Muslim faith," enthused Mr Welby. Ah yes, just the sort of thing you could use to start a conversation with a woman with her face covered who has shut herself off from the world around her and is actively telling us that she does not want to interact with the alien culture she inhabits.

"Telling stories about ourselves and others, in a way that celebrates the full scope of what it means to be human: that for me is what makes a reality show."

Nobody is arguing against finding out more about those around us, but why do "those around us" always have to be defined by their religion? You don't make a cohesive and trusting society by putting religious labels on people and then reinforcing the resultant barriers with TV programmes that encourage us to overlook the individual and see only members of religious groups who all apparently think the same way and are defined entirely by their "faith".

It is a particular arrogance of the Church of England that it thinks the BBC has some kind of duty to promote religion. Not just explore it in an objective way, but to evangelise on its behalf. And so you have Songs of Praise, Thought for the Day, Pause for Thought and endless church services on Radio 3 and Radio 4.

During Christian festivals like Easter the BBC can seem more like a broadcast edition of The Church Times than the national broadcaster to a nation that shows hardly any interest in religion. (Indeed, the audiences for some religious programmes are so small they can't even be measured).

ITV had to accept reality and no longer makes "religious programming". Its commercial considerations force it to acknowledge that there is no audience for religion and therefore no advertising.

The BBC Trust has commissioned a report looking at impartiality in the BBC's presentation of religion. Again, this is likely to be the result of the same concerted effort to give religion a special status on TV because of accusations (from religious interests) that it is not "treated fairly".

The NSS was invited to contribute to this inquiry (pdf) and our response was not, I suspect, quite what the religious interests would have wanted. We don't know how the report will be received or what the outcome of the review will be, but we'll keep you posted.