Where there is state religion, there is less freedom 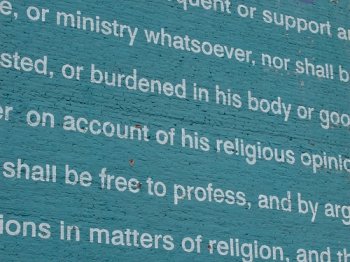 In a recent paper, "State Religion and Freedom: A Comparative Analysis", published by the Religion and Politics Section of the American Political Science Association, Professor Steven Kettell discusses the findings of his comparative analysis on the relationship between state religion and individual freedom.

Although he notes that his findings should be viewed with some caution - given that his research requires more detailed analysis – provisionally, his study reveals some very interesting findings and his overall thesis is a compelling one.

Kettell's study highlights two significant findings. The first is that state religions are shown to be disproportionately clustered in those countries classed as "less free".

The second finding is that in those countries with a state religion, there are significantly lower levels of political and civil freedom (i.e. in terms of political rights, civil liberties, and religious persecution) and a notably higher degree of government and social regulation of religion, as well as higher levels of favouritism toward religion.

Political systems also played a significant role however; perhaps unsurprisingly none of the countries classed as 'not free' and all those considered free were liberal democracies, regardless of whether or not they possessed a state religion. Nevertheless, the pattern observed in terms of the relevance of a state religion's form when it comes to levels of freedom in a country, was consistent for liberal democracies also.

In response to these findings, the question that then might be asked is: Why do we see this negative impact of state religion on freedom in a country?

Kettell dismisses the often-pointed to factors of human development, religiosity or religious diversity as central to a lack of freedom in those societies with state religions. Instead, he contends, the reasons behind this phenomenon are likely to be based on the institutional dynamics of state religion. Kettell argues that since the very purpose of a state religion is to promote and support one particular religious perspective over any other, and to do so by extending political, legal and financial support for an institutional representation of that perspective, it is not overly surprising that such an arrangement should lead to limitations in political and religious freedoms.

What recognising one religion as a state religion does, Kettell argues, is to ground the authority and legitimacy of the state on sectarian criteria, and to imbue within the notion of national identity one particular religious affiliation. This inevitably institutionalises a ranking of citizenship. Thus, not only does this kind of institutional favouritism and biased conception of religious legitimacy undermine notions of civic equality, fairness, and individual freedom, it inevitably generates social divisions and tensions around religious issues, fosters intolerance of those not subscribing to the state religion, and corrodes the very democratic legitimacy and accountability which helps guarantee freedom in the first place.

Significantly, the paper concludes that the only way to avoid this negative correlation between state religion and freedom, and to best ensure the protection and promotion of human rights and freedom is to maintain a secular state; a state that is free from the institutional imperative to legitimise and officially recognise any one particular set of beliefs, a state that treats all citizens equally regardless of what they choose to believe.

The paper can be seen by subscribers here