After Lord Carey’s attack, Prime Minister assures us that he is a good Christian 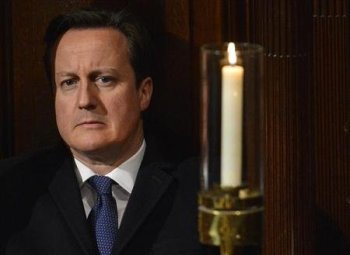 Still wincing from Lord Carey's attack, the Prime Minister David Cameron put out his own Easter message, assuring religious organisations that "As long as I am Prime Minister, they will have the support of this government."

Downing Street, which rejected Lord Carey's criticisms, insisted Mr Cameron's message had been written before the attack and was not a response.

The Prime Minister said he was "particularly proud" of his government's decision to protect overseas aid spending to meet an international development commitment. Quoting the Bible, he said: "St Peter reminds us of the hope that comes from new birth through the resurrection of Jesus Christ. As Christians, it also reminds us of Jesus's legacy of generosity, tolerance, mercy, and forgiveness.

"That legacy lives on in so many Christian charities and churches both at home and abroad. Whether they are meeting the needs of the poor, helping people in trouble, or providing spiritual guidance and support to those in need, faith institutions perform an incredible role to the benefit of our society.

"As long as I am Prime Minister, they will have the support of this government. With that in mind, I am particularly proud to lead a government that has kept its promise to invest 0.7% of our gross national income on helping the world's poorest, and I am grateful that we have been able to partner with both Christian and non-Christian charities to relieve suffering overseas."

It had been "an extraordinary few days for Christians" with the enthronement of Justin Welby as the new Archbishop of Canterbury and the election of a new pope, he said. Writing in the Daily Mail, Lord Carey said he believed Mr Cameron was "sincere" in his desire to make Britain a place "where people of faith may exercise their beliefs fully".