Secularists: put your principles into action and support the NSS 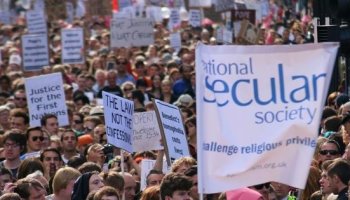 With so much at stake, we are eagerly awaiting the result of the four European Court cases that will decide whether Christians are entitled to special treatment at work.

We believe that the British courts were right to reject these cases.

Although they were presented in the press as "Christian persecution", they were nothing of the sort. For every privilege that religious believers gain in the workplace, someone else is going to be disadvantaged.

The National Secular Society was the only organisation that intervened in these cases to argue that the courts had got it right. And we will continue to argue this, because the Christian activists behind these challenges to equality law are not going to go away. They will bring one case after another in the hope that eventually they will secure the privileged place for themselves that they feel is theirs by right.

The NSS throughout its long history has supported progressive causes, and we will go on doing so, particularly when religion is standing in the way of human rights and fair treatment for all. We will, as we have done in the past, support the call for full gay equality, for the right of women to decide for themselves about family planning and abortion.

We will continue to escalate the call for disestablishment of the Church of England, for an end to bishops in the House of Lords, for an end to the vast amounts of money being spent on religious propaganda and separatism in our state education system. In these times of financial strictures there is no justification for the state to pay the salaries of clergypeople in hospitals, prisons and the armed forces (and increasingly in schools, too).

We need to reinforce our struggle against the so-called "sharia courts" operating in this country that continue to mete out injustice and inequality to women and children. We need to protect free expression from the demands of religious leaders who want to outlaw criticism of their beliefs.

We can only fight these battles with your help. The NSS depends entirely on its members for its existence. We receive no outside support.

But as much as the financial contributions that members provide are essential, we need to be able to show that there is a significant body of support for our aims and objectives. Please consider joining if you aren't a member, rejoining if you are a lapsed member or renewing if needs be. Don't watch from the sidelines – be part of the struggle for a secular society.

Members who are paying an annual subscription (rather than paying by standing order) are due to renew their membership this month. If you joined after September last year, your subscription is good for the coming year.

We certainly hope you will stay with us as we fight to hold back the tide of religious demands for privilege.

You can do all this simply, quickly and securely with your credit card here. If you'd prefer to send a cheque, our address is NSS,25 Red Lion Square,LondonWC1R 4RL.

We've got another big year coming up and the strength of our voice is crucial. Please be part of it. Put your principles into action today.

Join or renew your membership to the National Secular Society

The move towards a secular society is reaching a crucial phase, and it is important that we keep up the pressure. But we can't do it without...