Faith-based welfare – the push goes on 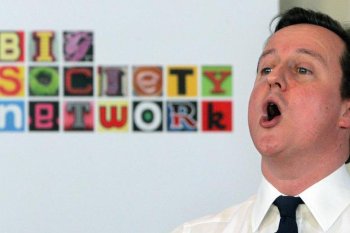 David Cameron's big society initiative could result in religion taking control of welfare provision, just as it did in Victorian times. Terry Sanderson warns against this and explains why the role of 'faith communities' should be limited and modest.

While sitting in a waiting area of my local hospital recently, I was struck by the racial and cultural diversity of those around me. There were people in hijabs and turbans, black people, white people, Chinese people and some wearing religious garb (mainly nuns).

All those people would (eventually) be seen by a doctor and receive treatment on the same basis according to need. No clinician or nurse would ask them about their religion, nobody would enquire into their marital status (unless it had clinical significance) and no-one would ask them about their sexual orientation (unless relevant to their treatment).

The doctors and nurses themselves were equally diverse and, indeed, when my turn came I was attended to by a very pleasant young woman in a headscarf. Whatever the religious affiliation of the staff, their differences were put aside while they went about their professional duties.

Living, as I do, in a large London borough, I expect I would see a similar mix of people if I went to the local social service department or housing office or my GP's surgery. All would be dealt with on an equal footing, according to the law – the secular law.

This is what we call our welfare state. It is something to be proud of, something to cherish. Something that takes care of us all when we need taking care of, without judgment or discrimination.

But lately, because of the economic downturn, there has been a move to unload some of these welfare services on to charities and religious groups. Mr Cameron's Big Society idea has given new hope to "faith-based" voluntary groups that they can access public money to take over services that the state no longer seems inclined, or capable, of providing.

The NSS has argued for a long time that this would be a regressive step.

Nevertheless, those Christians who share Mr Cameron's vision of going back to the future are busy making the case that they should, indeed, take control of the welfare system, just as they did in Victorian times.

It may not be the stated aim of these advocates of "faith-based welfare", but if their dreams were to be realised, many vulnerable people would suddenly find themselves once more reliant on the whims of charity and the prejudices of the pious.

The latest piece of propaganda in this area comes from the "think tank" Demos, which has issued a report calling on the Government to increase the involvement with "faith communities" in providing services.

The report, Faithful Providers, has been prepared by a group of people already known for their determination to get more religion into the political system in Britain – chief among them the evangelical Christian MP Stephen Timms. (The report is sponsored by an organisation called the Bill Hill Trust, whose primary objective is "the advancement of the Christian religion.")

It speaks highly of religiously-motivated volunteers, telling us that they have a special calling and are prepared to put in longer hours for less pay than their secular equivalents. But as someone who has devoted the whole of their working life to the "care sector", I feel a bit miffed at being told that my lack of religion somehow makes my contribution less valuable.

The report claims that religious groups are often denied funding by local authorities because they are perceived as discriminatory and proselytising.

The author of the report, Jonathan Birdwell, says this isn't true and that the 20 organisations that were questioned for this study (he admits this is too small a sample to have any academic significance) said they were aware that preaching and proselytising would put off young people and therefore they didn't do it (well, not much, anyway).

At the same time Mr Birdwell admits: "some organisations spoke about hiring members of their own faith exclusively as employees." He asserts that "this practice is not discriminatory" – even when carried out with public money.

He also suggests that although "aggressive proselytising" should be prohibited, service commissioners should not "demand that faith-based providers not proselytise at all... assuming that there is a plurality of service providers, there should be nothing wrong with service providers openly discussing their faith, particularly to those service users who are interested in learning more and/or open to a spiritual element."

Mr Birdwell says that those local authorities that engage "faith-based" providers should encourage them to work with other faith groups – although if proselytising is part of the service provision, it wouldn't be long before conflict and division arose.

The report explores the many initiatives that this Government and the previous two Governments have put into place to try to encourage "faith groups" not only to get involved in service provision but to try to get along with each other. Tens of millions of pounds have been spent on these schemes and still there is little to show for it.

As a major provider of "faith-based" services, Mr Birdwell unwisely points to "faith schools". This does his argument no good at all.

He should know that schools provided by churches and mosques are the epitome of discrimination – not only against service users (pupils from the wrong religion or none) but against staff, who can be selected on the basis of their claimed religion. If he imagines this is a good model for "faith-based welfare", we can look forward to a huge level of injustice and misuse of public funding.

Mr Birdwell admits that not everyone in the "faith sector" thinks the Big Society is a good way for religious groups to proceed:

This sounds like a much better plan – to "add value" to a secular welfare state rather than try to provide an alternative structure.

Surely a much more Christian approach to alleviating suffering would be to force the state to embrace its responsibilities to its citizens instead of trying to unload them on to the shoulders of organisations that are ill-equipped to manage.

There is a simple solution to all this.

1) Religious groups should accept that their role in service provision will be limited and modest.

If this were done, then levels of suspicion and mistrust would be considerably lessened. Local authorities would feel safer to dish out scarce resources in the knowledge that they would be used solely to provide the service in a neutral and inclusive manner – and would not be used to promote any particular religion.

The unconvincing claims made by Demos in its report are further undermined by the theological track records of the people who have produced it. When you know where they are coming from it does, indeed, read like rather crude propaganda.