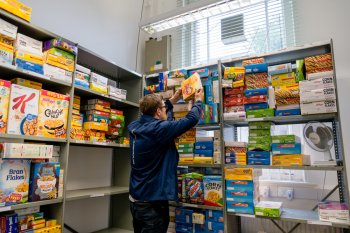 The NSS urged the government to ensure it only supports organisations that are "genuinely inclusive of all, regardless of religion or belief, in tackling poverty", in response to a consultation on ending the need for food banks.

The NSS welcomed the government's aim to "strengthen the protection of human rights" in its policies on tackling food insecurity.

But it warned food banks, debt advice and other services "may not pay full regard to human rights" when delivered by organisations with a religious agenda.

The NSS raised the issue of religious discrimination against prospective employees of food banks affiliated with the Trussell Trust, whose network accounts for approximately two-thirds of all emergency food bank provision in the UK.

The Trussell Trust is "based on, shaped, and guided by Christian principles" according to its website.

In September Dundee Foodbank, which is a member of the network but is independently run, was accused of breaching the Equality Act 2010 after publishing a job vacancy for a stock coordinator stating successful candidates must have "Christian values" and "evidence a live connection with the church".

The NSS urged the government to raise the issue of discriminatory recruitment practices in its food bank network with the Trussell Trust during its engagement with them.

The NSS also raised concerns about plans to distribute over £7 million to providers of free debt advice.

It noted that in the past, the Scottish Government had funded Christians Against Poverty (CAP), an evangelical Christian charity which invites clients to pray while providing debt advice.

Advice UK, the national charity which supports independent advice services, terminated CAP's membership in 2011 when it judged the 'emotional fee' of asking clients to pray whilst offering debt advice to be incompatible with membership.

CAP also has a policy of only recruiting Christians, which appears to be applied to all roles regardless of the duties involved.

The NSS urged the government to "place greater requirements on recipients of public funds to ensure they do not proselytise and do not apply religion-based discrimination in their recruitment policies."

"However, where religious organisations join others in delivering publicly funded services, it is reasonable to require them to respect boundaries and refrain from proselytising or discriminating against service users or their employees.

"We therefore sincerely hope the Scottish Government will proactively address the issues raised here when working with foodbanks, debt advice providers and any other community service provider to eliminate poverty, to ensure all members of the public are treated with fairness and dignity regardless of religion or belief."