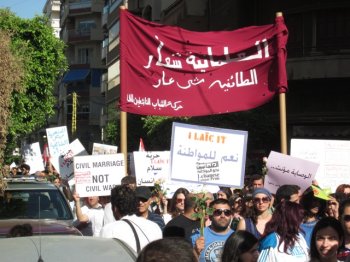 While in most respects the previous seventeen months have seen undreamt-of victories for civil liberties in the Middle East, there is one crucial measure by which things have not improved, and in fact threaten to worsen considerably: the separation of religion and politics.

In the Gulf, petro-monarchs have set aside their traditional tribal and other distrusts in the spirit of Sunni unity and purity against the Shia heretics of Bahrain. Entire cities in Yemen have been taken over by Al-Qaeda in the Arabian Peninsula (AQAP). In Syria, what started as a nonviolent uprising now looks to be heading toward a civil war with ugly sectarian undertones. And in North Africa, Islamist parties have won by dizzying margins in every election from Cairo to Casablanca.

So it was with no small satisfaction that I surveyed the crowd at the Lebanese Laïque Pride Secular March Towards Citizenship in central Beirut on Sunday. For the third year in a row, the country's secular community took to the streets to call for an end to the sectarian order and the implementation of a number of draft laws against things like censorship and domestic violence. To the bemusement and occasional encouragement of bystanders, some 1,500 students, professionals, activists and even the odd celebrity marched for three hours carrying banners like "Civil marriage not civil war" and variously chanting "What's your sect? None of your business!" or "Revolution!" or "The people want a secular state".

As well they might, for Lebanon is a country where being born into the wrong religion means you can't become president. Nor can you become prime minister, or speaker of the parliament, and so on down the cabinet, every seat of which is constitutionally reserved for a member of one faith or another. Civil service, military and security positions, too, are rationed along communal lines. Not even university faculty appointments are suffered to upset the sanctity of the sectarian calculus.

Similarly, citizenship is officially defined by faith, so that marital, inheritance and other such disputes are settled not by lawyers but theologians. What does that mean in practice? Well, for starters, that a Muslim man is fully within his rights to beat his wife, thanks to Sura 4:34 of the Qur'an, which, after laying down that "Men are in charge of women", instructs husbands to "strike" wayward spouses. This jewel of 7th century Bedouin culture is the law of the land in 21st century Lebanon. In 2011, the Sunni Grand Mufti, Muhammad Qabbani, actually rejected a draft law against domestic violence on the grounds that "it harms the Muslim woman and denies her of the rights granted [to her]". But the humiliation doesn't end there: that same husband may also rape his wife, since the learned sheikhs decline to recognize the concept of marital rape in the first place. "There's nothing called rape between a husband and wife", as the al-Jamaa al-Islamiyah [Islamic Group] MP Imad Hout eloquently put it last December. "It's called forcing someone violently to have intercourse."

To the outsider, this might seem fairly straightforward to reform with some basic legislation. Alas, there are immense obstacles to this, many of them spawned and cultivated by the system itself. The clergy, for instance, has a deeply vested financial interest in the status quo. To take just a small example, every Christian who marries is obliged to pay a fee, or 'donation', to their local parish. This tax (as it ought to be called), which can run into the thousands of dollars, is required irrespective of where the ceremony actually takes place. And it is, of course, distinct from the substantial extra raked in for the hiring of the premises and priest(s). Thus do the Lord's terrestrial deputies succeed in turning even an occasion of love into yet another sordid extortion racket.

What makes this all so disheartening is that it didn't by any means have to turn out this way. For just when the Ottomans were beginning to institutionalise sectarianism in the 19th century by partitioning Mount Lebanon into distinct religious administrative districts, something very different was taking place simultaneously. From the lexicographer Ahmad Faris al-Shidyaq to the poet and scholar Ibrahim al-Yaziji to Butrus al-Bustani, the polymath known as al-mu'allim (the master); the Lebanese were playing a central role in an extraordinary intellectual and cultural spring that was flourishing across the entire Levant.

These were men of tremendously diverse interests and backgrounds – both Christians and Muslims among them – but they were united by two passions above all: secularism and Arab nationalism. Crucially, they understood the subversive potential of the former, and its indispensability for the latter, so that, so far from being an appeasement of their colonial masters, they saw secularism as their greatest hope of shaking them off.

If Lebanon's secularists, therefore, are to successfully eradicate sectarianism from their national consciousness, there are surely worse ways to begin than by reclaiming the memory of their own intellectual forefathers, who appreciated so keenly so many years ago that secularism and liberation and dignity were not only mutually compatible, but in fact equivalent expressions of the same common goal.

Alex Rowell is a Beirut-based reporter for NOW Lebanon. He tweets @disgraceofgod