The Church of England – myth and reality 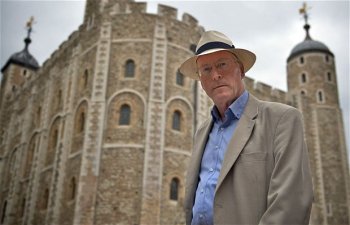 We are told constantly how important the Church of England is to this country and how fond of it we all are. That doesn't sit very well with the result of a BBC survey for the quiz show Pointless that asked 100 respondents to name Archbishops of Canterbury. After ten years in office, only seven people managed to name Rowan Williams.

The other claim that is continually made by apologists for the Church of England is that it created our present tolerant society. It was also responsible, it claims, for democracy, human rights, women's emancipation, the welcoming of strangers etc etc. Well, that myth is under scrutiny in a BBC2 programme How God Made the English (Saturday 8.20pm – the first episode is on BBC iPlayer).

Writing in the Radio Times about it, Diarmaid MacCulloch (pictured right), professor of History of the Church at the University of Oxford, says:

"The English have a rooted belief that they have a long and glorious tradition of tolerance and multi-faith, multi-ethnic, everybody welcome here. But let me take you back to the bad old days. The first victims of English intolerance were Jews: they came over with William the Conqueror, and there followed two centuries of a downward spiral into murderous violence, financial exploitation and in 1290, complete expulsion.England gained the anti-accolade of being the first kingdom in Europe to expel all its Jews.

"It was also the laboratory for the infamous blood libel - first invented by the Benedictine monks of Norwich Cathedral when in the mid-12th century they tried to start the cult of a Norwich teenager called William who had died under mysterious circumstances, allegedly at the hands of Jews. It was all nonsense, but what the English do today, the world does tomorrow: there were new examples of libel as recently as post-World War II Poland.

"Think next of the 16th-century Reformation. It was not just "Bloody Mary", whom Protestants remember, who chalked up the bodies. Elizabeth I's Church of England was one of the most intolerant churches in Europe, killing more Catholics than any other Protestant country."

Professor MacCulloch says: "The churches learnt to be tolerant the hard way, because they were forced into it. The Church of England wanted to be a religious monopoly in this country, but it failed; first it had to tolerate other Protestants, then even Catholics.

"Finally, when the English and the Scots formed a partnership with a new identity as the British and gained an Empire, they couldn't force their subjects to become Christians, let alone Protestant, so British governments made a virtue out of tolerating all religions. Christian Churches only grudgingly caught up with the realities – toleration is a paradoxical consequence of colonialism."

So, it turns out the Church did give us the gift of tolerance – but only by showing us what the alternative is like.

Diarmaid MacCulloch concludes: "Our modern, national tolerance is real, yet fragile. Its tangled past should teach us that not only does tolerance save lives, but it makes them infinitely happier."

It has become clear that both Catholicism and the Church of England (and, for all I know, Islam) play on the shortness of memory to rewrite their often vile histories so that, in their own sanitised versions, they emerge as heroes and progressives rather than the persecutors and murderers that they really were.

See also: When will we see an Islamic Enlightenment?