Mr Pickles “community cohesion” policy is a recipe for conflict 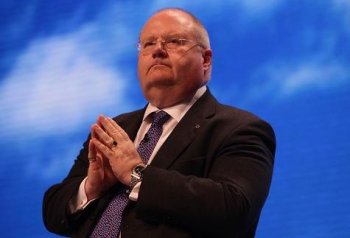 Why is the Coalition Government increasingly embracing the policy of the US Republicans of appropriating religion for political purposes? It's not even as though it works very well for the GOP. In fact, Rick Santorum's present display of religious zealotry must surely be ensuring another term for Obama.

David Cameron set the Tory ball rolling last year with his speech lauding the virtues of a Christian Society. This was followed up by Baroness Warsi's speech at theVatican, in which she attacked the phantom menace of "militant secularisation". Now we have the Communities Secretary, Eric Pickles, calling for the return of Christianity to the centre of public life.

"A few people, a handful of activists, have insisted that it isn't enough simply to celebrate the beliefs of minority communities; they want to disown the traditions and heritage of the majority, including the Christian faith and the English language.

"In recent years we've seen public bodies bending over backwards to translate documents up to and including their annual report into a variety of foreign languages.

"We've seen men and women disciplined for wearing modest symbols of Christian faith at work, and we've seen legal challenges to councils opening their proceedings with prayers, a tradition that goes back generations, brings comfort to many and hurts no one. This is the politics of division.

"Harriet Harman [deputy Labour leader and author of the Equalities Act] was leading the country down the wrong path. If we are to remain a country where people of different backgrounds feel at ease and get along, we need more confidence in our national traditions. We need to draw a line.

"Some see religion as a problem that needs to be solved. We see it as part of the solution."

The problem with this is that the latest research shows large proportions of the population of this country are not Christian — or religious at all — and they simply cannot be suddenly forced to live under a semi-theocratic regime run by Christians. The Government is heading for big problems with this. And for all his talk of including all religions, Mr Pickles' own colourful history suggests that Christianity is his abiding passion.

While I agree with the Communities Secretary that there should be some common values to live by — a shared language and respect for human rights — there cannot be a religious hierarchy that discounts the feelings of those who don't share in that faith. It is a recipe for conflict between communities that already eye each other with suspicion. We see all over the world that when religion is given power, conflict follows. We have managed to some extent to keep this kind of sectarianism out of our policy making; now Mr Pickles intends to restore it in a big way. The Government is going in completely the wrong direction with this and it is bad news for all of us."