A single oath in court for all, regardless of belief or religion 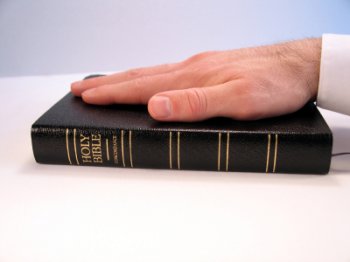 Every day in Scotland, God is mentioned in courts. In particular, when juries are sworn in and when witnesses swear an oath to tell the truth during their evidence. The exception is when those opposed to swearing an oath serve on a jury or affirm to give their evidence.

The practice of affirmation was introduced over 200 years ago to overcome a problem with atheists and certain religious minorities, in particular Quakers, refusing to swear the oath to God.

Historically swearing, an oath to God served two purposes; firstly, the religious aspect is that the witness is promising to tell the truth and shall answer to God if they lie in court. Secondly, the legal aspect is that the witnesses' status changes from an everyday citizen to a person whose answers to questions must be truthful as otherwise they are committing an offence, and potentially a very serious offence. However the present oath: "I swear by Almighty God that I will tell the truth, the whole truth and nothing but the truth" is anachronistic in an ever-changing population.

The religious landscape has changed since the affirmation was introduced. There is an ever-increasing number of atheists in Scotland and as such the number of affirmations is increasing in court, particularly noticeable with medical experts. Atheists are forced to either "quietly" swear the oath without any Godly belief or to affirm.

The present statement of affirmation for witnesses is: "I solemnly, sincerely and truly declare and affirm that I will tell the truth, the whole truth and nothing but the truth" (Oaths Act 1978). Atheists who swear the "religious oath" should note that they are not exempt from perjury charges for lying to a God they don't believe in.

The problem with affirmation is that it sets a witness out and it instantly draws a great deal of attention to the fact that the person will not swear to God. It is a statement relating to a person's personality and belief that no other witness is required to make, unless it is a facet of the particular case. It is impossible to be certain that such an aspect of the witnesses' personality will not affect the views of some jurors as to the quality of their evidence. Those holding extremely strong (potentially bigoted) religious views may dismiss everything the witness says in light of their affirmation. Even if the juror is not that strongly affected, but still affected to a degree, then there is potential for an unfair verdict that need not exist in a modern legal system.

In some recent cases, rather than simplifying and neutralising the process, courts are accommodating the wishes of witnesses seeking to swear on different religious texts. Some witnesses now wish to swear on the Koran in court before giving evidence. While it is understandable why the court might want to accommodate witnesses' requests, it again creates more problems of prejudice than it solves. For example, is a Muslim more or less likely to be telling the truth if the Koran has been used in court? That is not a fair question but it is one that many jurors might find themselves considering. This creates an unnecessary distraction and problem for juries in the difficult task of assessing evidence in any case.

The way forward would be to produce a single oath for everyone regardless of belief or religion. By slightly modifying the existing oath to state: "I swear that I will tell the truth, the whole truth and nothing but the truth" all witnesses would be on an equal footing and judged accordingly.

Sean Templeton is a Scottish Advocate and has been actively involved in court practice for over 10 years as a solicitor and as counsel.

Sean Templeton is a Scottish Advocate and has been actively involved in court practice for over 15 years as a solicitor and as counsel. The views expressed in our blogs are those of the author and may not represent the views of the NSS.