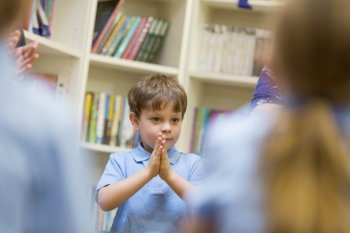 In a groundbreaking ruling today, the High Court of Northern Ireland found the current arrangements for collective worship and religious education (RE) breach an article in the European Convention on Human Rights (ECHR) which provides that the state "must respect the right of parents' religious and philosophical convictions in respect of education and teaching".

The case was brought in 2021 by a father and his seven year old daughter. They were granted leave to seek a judicial review of the arrangements after the girl's family, who are non-religious, discovered her praying late into the night.

This led them to investigate how her school was imposing Christianity on young children through religious assemblies and RE lessons.

They argued that a complete focus on Christianity, to the exclusion of all other faiths and with no meaningful alternative, is an unlawful violation of the human rights of children in NI.

They were represented by human rights lawyer Darragh Mackin of Phoenix Law, who has discussed the case at a recent NSS conference and podcast.

RE in NI schools is controlled by religious bodies to a greater extent than anywhere else in the UK, and aims to "develop an awareness, knowledge, understanding and appreciation of the key Christian teachings… and develop an ability to interpret and relate the Bible to life". RE is not thoroughly inspected and is often delivered partly by external evangelical organisations.

The ruling said the court "considers that the unlawfulness it has identified requires a reconsideration of the core curriculum and the impugned legislation" in relation to the teaching of RE and the provision of collective worship.

It said the matter is "currently under review" and that in carrying out a reconsideration and review, the Department of Education and NI Assembly "should ensure that the arrangements for the teaching of RE and CW in Northern Ireland are compliant" with the provisions of the ECHR.

It added the court will "allow the parties to reflect on the judgment and will invite further submissions from counsel before making a final order."

NSS: "NI must now make its schools truly inclusive of all children"

NSS chief executive Stephen Evans congratulated the family and their legal team, saying the ruling was "a significant step forward for more inclusive and pluralistic schools in Northern Ireland".

He said: "Christian privilege has dominated education in Northern Ireland for too long, fuelling its serious problems of segregation and sectarianism. Under this historic ruling today, this cannot continue.

"Northern Ireland must now make its schools truly inclusive of all children and their families, whatever their religion or belief.

"We also hope that other UK governments are watching closely. In light of this ruling, laws imposing collective worship in UK schools look shakier than ever."