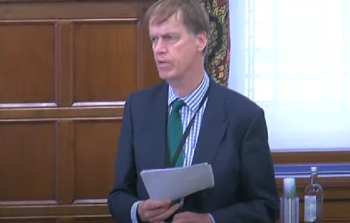 During the Westminster Hall debate yesterday, nearly twice as many MPs spoke in favour of legalising assisted dying for terminally ill, mentally competent adults as those opposed.

The National Secular Society, which supports bodily autonomy and works to protect patients from the imposition of other people's religious views, briefed all MPs prior to the debate.

The NSS asked MPs to help ensure religious teachings "are not imposed on the majority who support a more compassionate assisted dying law in the UK".

The debate was called after a petition sponsored by Dignity in Dying gained over 155,000 signatures in support of legalising assisted dying.

Evangelical Christian Stephen Timms (pictured) objected to the NSS's argument that opponents with religious objections to assisted dying disguise them with secular concerns, by exaggerating the risks and weaponising them to spread fear.

He said disabled people's organisations that legalising assisted dying "would be a deeply damaging change".

But former health secretary Matt Hancock, who supports a change in law, said: "I have heard that argument made a couple of times, and I respect the associations involved, but how would the right hon. Member reflect on the fact that, according to polls, 86% of people living with a disability are in favour of a change?"

He added that this percentage is greater than in the population as a whole (84%) and that he did "not understand the point he is making".

Edward Leigh, who is Catholic and also opposes abortion, said he wished to make a "theological point" against assisted dying and called on members to "try to take a pro-life view".

Leigh suggested legalising assisted dying would mean GPs would have the "burden" of questioning if they should "end it" for old people. Andy Slaughter criticised this as "appalling scaremongering".

Slaughter added: "This should not be a debate only between different attitudes, religious practices or medical treatments; it should be a debate about ensuring that the needs of the terminally ill are met in the most appropriate and compassionate way."

Christians in Parliament member Ian Paisley also invoked religion in his opposition to assisted dying, saying: "When we walked into this Chamber today, we walked under a portrait of Moses. That portrait carried with it a biblical and, indeed, faith inspiration that we can make good laws."

'In a liberal democracy, the religious views of some do not restrict the rights and freedom of others'

Other MPs echoed the NSS's concerns that religion should not determine policy on assisted dying.

Lucy Allan said: "I deeply respect the religious views of others on all subjects, and it is their right to express their views and live them out.

"However, in a liberal democracy, the religious views of some do not restrict the rights and freedom of others, and so it is with this issue."

Aaron Bell said: "I do respect the sincerity of people who make faith-based arguments here.

"However, many of us do not have faith. Increasingly, that is the case for many of our constituents. We can see that in the census."

He added that many people who are religious, including Wera Hobhouse who referred to her Christian faith in the debate, support assisted dying.

Hobhouse also expressed disappointment that that no time was given to debate Baroness Molly Meacher's assisted dying bill and that Conservative peers were whipped to vote against an assisted dying amendment to the Health and Care Act.

NSS supporter Ruth Cadbury said parliament is "too often behind the curve of public opinion", citing the laws on divorce, blasphemy and homosexuality and same-sex marriage as examples.

Responding on behalf of the government, under-secretary of state for justice James Cartlidge said if it became the clearly expressed will of parliament to legalise assisted dying, the government would ensure "that the relevant legislation was delivered as effectively as possible".

NSS: "Decisions around assisted dying should be based on evidence, compassion, and respect for patient autonomy"

NSS chief executive Stephen Evans said: "It is heartening to see the vast majority of MPs in this debate stand up for the principle that decisions around assisted dying should be based not on religious dogma, but on evidence, compassion, and respect for patient autonomy.

"The current legal position causes heart-rending suffering and provides dying adults with no choice or control over their death, with tragic consequences for dying people and their families.

"There is now overwhelming public support for the law to be reformed to enable assisted dying with robust legal safeguards. As is happening in an increasing number of jurisdictions around the world, legislation can be passed that will protect vulnerable people from pressure to end their lives, and support people to exercise their autonomy and end their suffering in a humane and dignified manner."

Write to your MP: Assisted dying

Ask your MP to support the implementation of a legal framework for assisted dying.