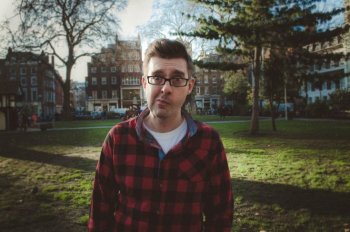 In a letter to the John Fisher School in Croydon, Ofsted said the Archdiocese of Southwark's actions had "unnerved and upset many in the school community".

The letter follows a snap inspection of the school in March prompted by the diocese's actions.

Simon James Green (pictured), an award-winning children's author, had been invited by school leaders to visit John Fisher School in March to talk about his career.

But the diocese, which oversees the Catholic secondary school for boys, called on leaders to cancel the visit because it fell "outside the scope of what is permissible in a Catholic school".

Its intervention followed a campaign by the website Catholic Truth and an email from the school's chaplain to parents protesting the talk.

The school's governing body voted in favour of the leaders' decision not to cancel the visit. In response, the diocese sacked school governors supportive of Green.

The diocese intended to replace the governing body with an interim executive board (IEB), but Sutton Council found that this did not comply with the law.

Ofsted also criticised the move, saying: "While the Catholic Church retains control of governance in Catholic schools, the archdiocese's attempt to impose an IEB was made unilaterally and without due regard to the published statutory guidance regarding the appointment of IEBs."

Ofsted said some leaders, staff and pupils "have been left feeling angry, confused and frustrated" by the events. It said some are "worried about the impression these events might give of the school's ethos".

Members of the National Education Union at the school are on strike today to protest the diocese's actions, despite threats to sack them by the governors appointed by the Catholic Church.

The National Secular Society has previously highlighted how faith schools, included those that are state-funded, are permitted to teach stigmatising ideas about gay people and same-sex relationships.

Alastair Lichten, head of education at the NSS, said: "This case demonstrates the tensions caused by having state-funded schools controlled by religious institutions.

"Leaders and governors at the school were overwhelmingly supportive of Green's visit. But for the Catholic diocese that ultimately controls the school, the idea of an openly gay man talking to pupils was clearly beyond the pale.

"Teachers' desires for the school to be an inclusive place of learning were brutally undermined by the diocese's homophobic religious agenda. This could lead to a chilling effect on other faith schools that want to be more inclusive.

"The only way to ensure such tensions do not arise again is for all state-funded schools to have an inclusive, secular, community ethos – without interference or imposition from religious groups."