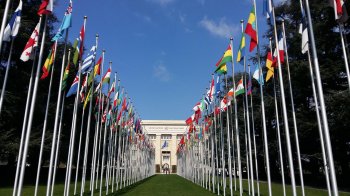 The NSS has submitted reports to the United Nations Committee on the Rights of the Child (UNCRC) as part of the committee's upcoming review of each state party's record on children's rights.

Each report focused on child abuse within institutions run by the Catholic Church, which has been the subject of sustained media attention in Canada and Chile.

The NSS has engaged with the UNCRC on clerical child abuse for the past 15 years.

The NSS said that past Canadian governments have been reluctant to adequately address child abuse within the Catholic Church.

A 2010 poll found at least two million adult Canadians personally knew someone who was sexually assaulted by a Catholic priest.

The NSS said the Church has continually attempted to evade financial responsibility for reparations to victims. It drew attention to evidence that the justice system had favoured the Catholic Church to the detriment of abuse victims.

This included a supreme court settlement which relieved the Catholic Church of financial responsibility for child abuse and decades-long delays in court actions resulting in victims dying without receiving compensation. It also cited Royal Commission findings that government officials and police had conspired to prevent Catholic-associated clerics suspected of abuse from being prosecuted.

The NSS additionally highlighted the "cultural genocide" at residential schools, which indigenous children were forced to attend deliberately beyond reach of their families. Seventy per cent of the schools were run by the Catholic Church.

It said over 4,100 children's deaths had been documented at residential schools, including from neglect, malnutrition and associated disease, abuse and deliberate infanticide. Estimates suggest thousands more died. Some grave markers have been removed by the Catholic Church which refuses to share records crucial to identify individual graves and how the children died.

The NSS said Chile had not responded to the UNCRC's request, prompted by an earlier NSS submission, for more information on developing strategies for preventing sexual abuse of children, including within the Catholic Church.

The names of around 360 people involved with the Church accused of child abuse have been recorded by an abuse survivors' network, and 33 religious orders are implicated.

The NSS said Catholic clerics appeared to enjoy "near impunity" from criminal law regarding abuse allegations.

The NSS recommendations for both Canada and Chile included an official inquiry into institutional responses to child abuse, adoption of additional safeguarding requirements, and either the adoption of, or improvements to, mandatory reporting laws on child sexual abuse.

It said the Canadian government should "do all in its power" to require the release of records relating to deaths and disposal of bodies at residential schools, and that "all reasonable possibilities" for criminal and civil action for damages be pursued.

NSS president Keith Porteous Wood said: "Around the world, including in Canada and Chile, there has been an unhealthy culture of acceptance of clerical child sexual abuse, and in some cases of deference to religious bodies.

"What's more, religious institutions routinely fail to report suspected child sexual abuse to secular authorities, even when the law requires it and the UN urges the Vatican to do it, while doing everything in their power to avoid payments of restitution to victims.

"We ask the UNCRC to take whatever steps necessary to ensure Canada and Chile fulfil their duty to protecting the rights of all children, including those in religious communities, and secure justice for all victims and survivors of clerical child abuse."