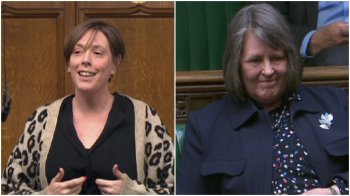 The government announced last month that a policy enacted in response to Covid-19 to allow early medical abortions at home in England would be scrapped at the end of August.

But today MPs voted 215 to 188 in favour of an amendment to the Health and Care Bill to keep the provision.

MPs who voted for the amendment include Jess Phillips (pictured, left), who argued keeping telemedicine for abortion gives women greater choice and safety.

In 2020 the government enabled women to receive all medication by post for abortions before 10 weeks' gestation following a telephone consultation, instead of visiting a clinic.

Calls to keep the provision were opposed by religious groups which object to abortion on principle, including the Church of England.

And it signed a joint letter by the Royal College of Obstetricians and Gynaecologists, the Royal College of Midwives and the British Medical Association to prime minister Boris Johnson, saying removing the service "would indicate a deep distrust of women and an institutional disregard for their reproductive rights".

A study published last year found that 80 per cent of women said telemedicine was their preferred option and they would choose it in the future.

The Welsh government has said temporary arrangements allowing early abortions to be carried out at home in Wales will be made permanent.

He said: "This is fantastic news for countless women all over England. Early abortion care at home has proven to be safe, effective, accessible, and preferred by women. Today's vote represents a real step forward for improving women's reproductive rights and healthcare choices.

"It was wrongheaded of the government to plan to end it. I'm delighted that this error has been corrected."

We strongly support the right of women to have legal and safe abortions and access to emergency contraception.