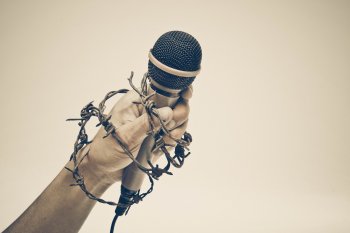 The Egyptian parliament proposed the draft law after journalist and presenter Ibrahim Issa called the Quran's account of the prophet Muhammad ascending to heaven "a completely delusional story" on a TV show on Friday.

Issa, a prominent critic of Islamism, also said the story was advocated "by Salafist preachers".

Egypt's Islamic advisory and governmental body Dar Al-Ifta said on Saturday that the Quranic story "can't be denied in any way."

The law was proposed on Sunday by the head of the Egyptian parliament's 'human rights committee' Tarek Radwan.

Sixty MPs, about 10 per cent of parliament, approved the draft law.

The prosecution general, the main legal advisor to the government, has ordered Issa to be investigated for 'blasphemy' after lawyers and the far-right Islamist Al-Nour Party filed complaints against him. Egypt's penal code outlaws "various forms of religious insult".

The Egyptian courts have reportedly experienced a "surge in cases" of 'blasphemy'.

The draft law is the latest in a series of measures Egypt has taken in recent years to curb free speech and control the media.

"Freedom to discuss Islam in the media must not be curbed by religious gatekeepers."